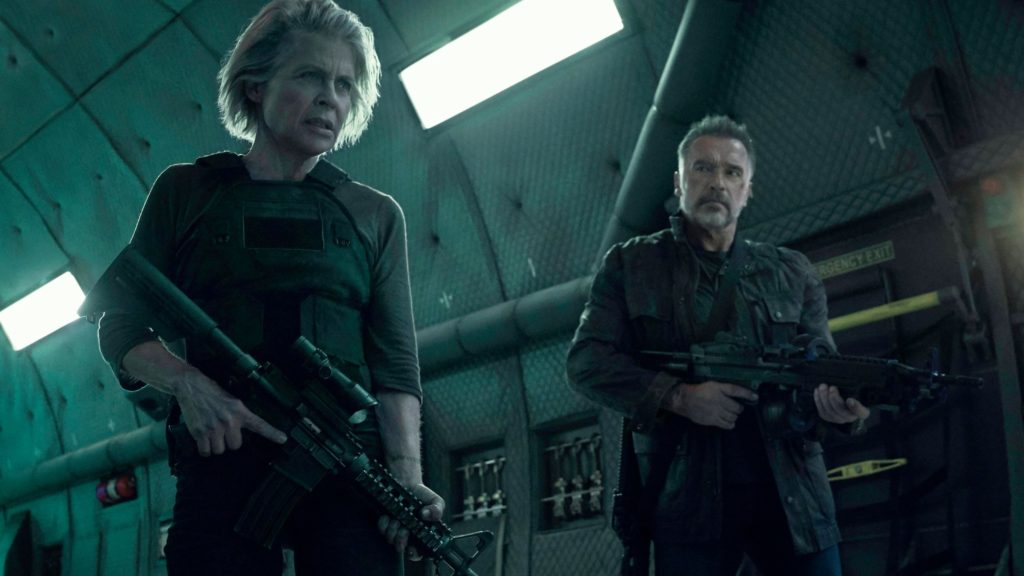 The box office disappointment of 2015’s Terminator: Genisys might have signaled the end of Hollywood’s preeminent Judgement Day narrative, but such a decision would have ignored the elements of the film that worked. For all its timeline shortcomings, Genisys served as a great outlet for Arnold Schwarzenegger to prove that his iconic role could improve with age. Schwarzenegger’s “Pops” T-101 was funny, caring, and perfectly capable of kicking ass.

With that in mind, Terminator: Dark Fate served as a natural vessel for the return of the franchise’s other true iconic star. While Terminator 3: Rise of the Machines and Genisys both have merits as action films, the absence of Linda Hamilton’s Sarah Connor has deprived the series of its original emotional core. For all the emphasis that’s been placed on John Connor, it is Sarah Connor who has been responsible for saving the savior.

Dark Fate as a film is completely aware of the puzzling contradictions that exist within “chosen one” narratives. To be told that you will someday be a figure of great importance seems to diminish the notion that there’s plenty of choices to made along the way. Terminator has always been a series about saving the future, but to do that, one must naturally also keep the present out of harm’s way.

Daniella Ramos (Natalia Reyes) wasn’t born to lead a resistance. Knowledge of future actions hardly alters this dynamic. Heroes are made, not willed into existence. For all the ways that Dark Fate feels rooted in the past, Reyes never feels lost in the shuffle, ensuring that Ramos remains a vital presence in the film as all the chaos unfolds around her.

While Terminator has always been a feminist franchise, Dark Fate lets its heroines lead the narrative. Mackenzie Davis plays Grace, an enhanced human capable of taking on a “Rev-9” Terminator (Gabriel Luna), the franchise’s most menacing villain since Robert Patrick’s iconic T-1000. For all the guardians who have been sent back in time to protect the savior of humanity, Grace manages to combine the strength of the T-101 with the compassion of Kyle Reese.

Dark Fate shines brightest when the focus is on Hamilton, who puts forth one of the best performances of her career. Sarah Connor isn’t the primary focus of the film, but an essential piece of its narrative. Connor hasn’t lost any of her edge from Judgment Day, but the characters wears the scars of the past while still being capable of eliciting more than a few laughs. Hamilton and Davis have a natural chemistry that brings plenty of levity to the film’s otherwise grim tone.

Fitting with the film’s feminist dynamic, Schwarzenegger takes a backseat role, similar to that of Harrison Ford’s Rick Deckard in Blade Runner 2049. The T-101 is still a vital piece of the narrative, but the film looks more to Hamilton than Schwarzenegger to be its elder states-person. This works for a lot of reasons, chiefly among them being that Schwarzenegger has had his time to shine in earlier sequels. His Dark Fate T-101 is a different take than his Genisys counter-part, but the films complement each other well at least in part because Dark Fate recognizes where to trod in this well-worn pasture.

Dark Fate isn’t a perfect movie by any means, but quite a satisfying journey for fans of the franchise. The film doesn’t really build on the format of the first one, the same model that’s been replicated by every sequel besides Salvation. For many, this return to the franchise is an unnecessary proposition.

It’s not exactly high praise to refer to something as more of the same, but Dark Fate has a firm understanding of the franchise’s mythology. Not every movie needs to reinvent the wheel, as long as its adaptation of the wheel remains an entertaining experience. Dark Fate brings together everything that fans loved about the first two Terminator films. Whatever timeline reboots lay ahead in the future for this franchise, the chance to see Sarah Connor once again in peak form should not be missed on the big screen.