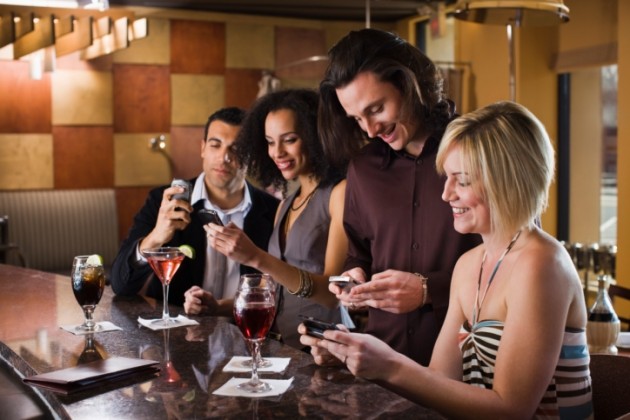 A recent study was conducted by the Market Diner, a famous New York eatery in Hell’s Kitchen regarding the establishment’s diminished reviews on popular websites such as Yelp! Rather unsurprisingly, cell phones were blamed for much of the issues levied against the restaurant, namely slower service and increased waiting time. While a place like the Market Diner would experience more extreme results by virtue of its popularity, there’s certainly much to be taken from this study.

The results challenge the age old question of whether or not the customer is always right. It seems rather ridiculous to suggest that a customer wouldn’t be able to use a cell phone in a non disruptive fashion. Or does it?

The problem is that the lines are blurred. What exactly constitutes disruptive? If customers are taking longer as a direct result of cell phone usage, then the restaurant has a legitimate claim that the phone usage is undercutting revenue. In the case of the Market Diner, patrons were spending nearly an hour longer at the restaurant than they were ten years prior. That could amount to a serious loss of earnings.

And for what really? Food pictures or further affirmation from Yelp! as to what entrée to order? How much does that really matter? To some people, it matters quite a bit. Which is okay.

To an extant. It’s perfectly reasonable to treat dining out as an experience worthy of documenting. Foodie culture exists whether we like it or not. The problem is that it’s cutting into restaurant revenues in a manner that’s hardly universally acceptable.

There’s no real easily applicable solution either. Exclusive restaurants with month long waiting lists could get away with a cell phone ban, but your average establishment can’t get away with that. It would appear on Yelp! and that would send customers away in a similar fashion as the cell phones themselves.

Which makes the best solution a hard one. Self-policing. It’s not fair to expect a restaurant to tell its customers off for cell phone abuse. That ensures that said customers will not return. But that doesn’t mean it’s not a rude practice that should be addressed.

I was at a restaurant for lunch the other day when a woman at the table next to me started to play a video on her phone. The ambiance at the place was quiet enough that the video could be heard from a reasonable distance. Naturally, the woman did a quick look around to size up the scene, but she continued to play said video at a rude volume. We made eye contact, but that was it. I wasn’t going to cause a ruckus by calling her out, but I wouldn’t blame anyone else for choosing to.

That woman sucks. Plain and simple. Next time, she should bring an iPod speaker so that the whole place can hear her nonsense.

The Market Diner study also suggested that customers were asking waiters for their Wifi passwords. Drawing the line here seems reasonable. A food picture doesn’t require data. Looking something up on Yelp! doesn’t use much. Why should the customer be entitled to anything more. Would you bring dirty dishes to a restaurant to have washed in the sink? Do you bring your garbage there so your waiter can haul it off to the dumpster?

It’s laughable that we’ve reached a point in our nation’s history where the restaurant industry is suffering as a result of cell phone addiction. Using a phone at the table is hardly a crime, but it should never reach a point where you become oblivious to the world around you. That appears to be the case with the Market Diner.

I also worry that studies like these undercut another problem. Bad waiters are likely to blame for the loss of revenue. It’s not like there aren’t plenty of those around. But truly bad service is fine to complain about. One just needs to consider if the patron did anything to contribute to the diminished service.

Cell phones “bring us together,” but they also create barriers that block the immediate world around us. This needs to stop. Everyone should take a step back and honestly evaluate whether or not their usage of technology is having a negative impact on the world around them. If the answer to that is yes, a change should be made. Livelihoods are a stake.