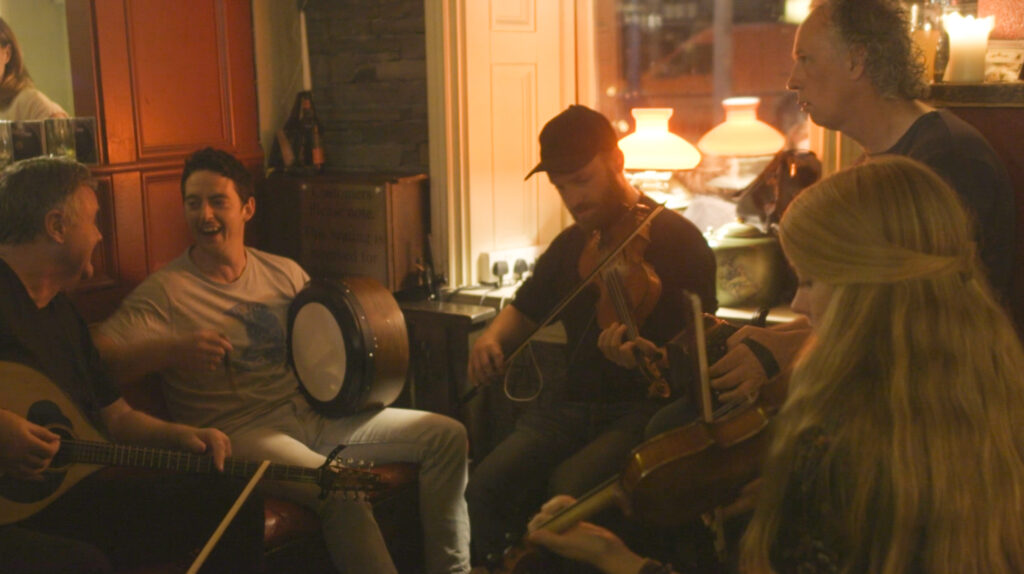 There are a lot of narratives centered on the hardships of moving, being forced to leave your homeland behind in pursuit of a better life. There’s an additional, often underrepresented burden placed on the communities that bear the brunt of these exoduses and the people left behind. Culture is a living, communal entity, forces of gravity that reflect the people who gravitate toward its orbit.

The documentary The Job of Songs explores the heavy burden that change places on culture to keep the spirit of a people alive. Centered on the village of Doolin, a small town on the western tip of Ireland, the narrative follows the people who stayed behind as the demands of the modern world laid their burdens on these tight-knit communities. Known for its breathtaking scenery, Doolin is the kind of place that’s been elevated by social media platforms such as Instagram that reward such geographical beauty.

Director Lila Schmitz is perpetually wary of the one-dimensional portrait crafted by a tourist selfie that hardly tells much of a story about a community. Doolin’s true vibrancy resonates from its people, particularly the musicians that populate the airwaves and the pubs each night. The songs they sing each night supply the glue that holds everything together.

The documentary supplies plenty of context into Doolin’s history, but Schmitz’s work really comes alive during the interviews and extended sequences featuring local musicians. The Job of Songs constantly recognizes the ace in the back of Schmitz’s pocket in the form of the beautiful music that frequently accompanies the imagery on the screen. There’s a vibrancy to the pub life that makes you feel a part of the room. After more than two years of a global pandemic, that kind of spirit resonates more than ever.

Schmitz’s greatest skill as a director is the way she tackles heavy subjects without getting melancholic or giving into the trap of nostalgia. It might be easy for people to reminisce about the idea of “the good old days,” but the people of Doolin aren’t adverse to change. Change is a part of every single community on the planet whether we like it or not. You have to grow with the times, while also maintaining the culture and history of the plots of earth we call home. Life happens in the present, not the past.

The film has a lean runtime of 73 minutes, a well-paced narrative that knows when it’s made its points. While The Job of Songs makes a compelling case for why someone should want to visit Doolin, Schmitz is more concerned with making sure that her audience understands why travel needs to be a more immersive experience than the kind of stuff that appeals to social media followings. Plenty of musicians came to Doolin for various reasons, choosing to stay after engaging with the magic that song provides.

People matter. Song brings us together, not just in merry times, but also to remember the moments that weren’t as fun. Ireland has faced plenty of hardships in the not-so-distant past, with plenty still alive who remember the catastrophic effects of famine and war. The simple beauty of perseverance comes alive so vividly when a group of musicians huddles together in a crowded pub. The Job of Songs captures all of that for anyone to enjoy from the comforts of their own home.