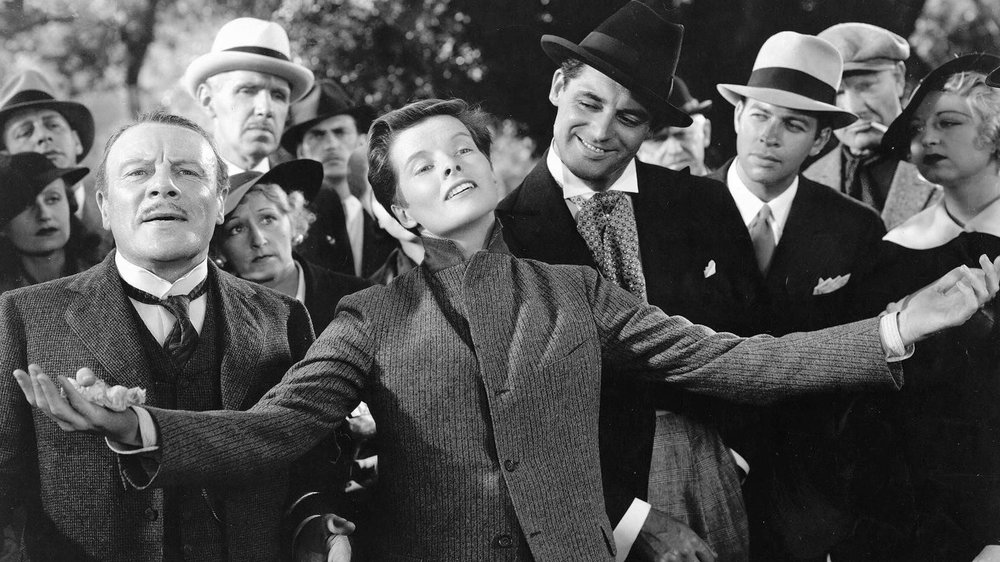 The Golden Age of Hollywood offers pretty slim pickings for queer-positive content for LGBTQ cinephiles. Gender variance is played almost exclusively for laughs, while broader gay representation tends to skew exclusively negative in the rare instances where homosexuality is even referenced at all. Being asked to offer transgender film recommendations is often just an exercise in figuring out which presents the least amount of cringe.

With all this in mind, 1935’s Sylvia Scarlett is an unusual outlier for a film centered on gender variance. Katharine Hepburn does a fabulous job in the lead role, remarkably transformed into “Sylvester” Scarlett as she flees France with her father, Henry (Edmund Gwenn), a hapless crook wanted for embezzlement. Henry’s inability to keep his mouth shut as to his crimes attracts fellow schemer Jimmy Monkley (Cary Grant) into their orbit, leading the three to team up for a series of cheap scams across England.

The first on-screen team-up of Hepburn and Grant is largely a disaster after its charming first act. Based on the Compton MacKenzie novel The Early Life and Adventures of Sylvia Scarlett, the film doesn’t have any obvious clue as to how to adapt a book into a feature. There isn’t really much of a narrative present across the 90-minute runtime, instead playing out like a series of loosely connected vignettes.

The comedy ends immediately after the narrative shifts gears away from the con job hijinks toward a bizarre romance between Sylvia and Michael Fane (Brian Aherne), who met the group during one of their “performances.” Michael is almost completely unphased by Sylvester revealing herself to be Sylvia, itself made weirder by the presence of Michael’s wife, Lily (Natalie Paley). Even stranger is how the film seems to forget about Jimmy, only for him to appear sporadically throughout the second half while throwing vague hints at also wanting a relationship with Sylvia.

The narrative offers no explanation for why Sylvia continues to occasionally present as Sylvester even after all the characters know who she is. There is no consistency from scene to scene beside the cast, almost no follow-through on any of the film’s storylines. The whole ordeal is a puzzling display of incompetence from director George Cukor, otherwise among the most talented filmmakers of his era.

Sylvia Scarlett does have some obvious appeal for LGBTQ audiences. Hepburn delivers a tactful take on gender variance in a film that is otherwise a disaster in practically every regard. It’s a stretch to call it nuanced in a narrative that looks like each scene was compiled without a second thought. LGBTQ audiences deserve better than the mess that is Sylvia Scarlett, but at least it is a respectful disaster.

« Black Widow is a bland action film without any sense of purpose
TTTE & Chill: Rusty to the Rescue »