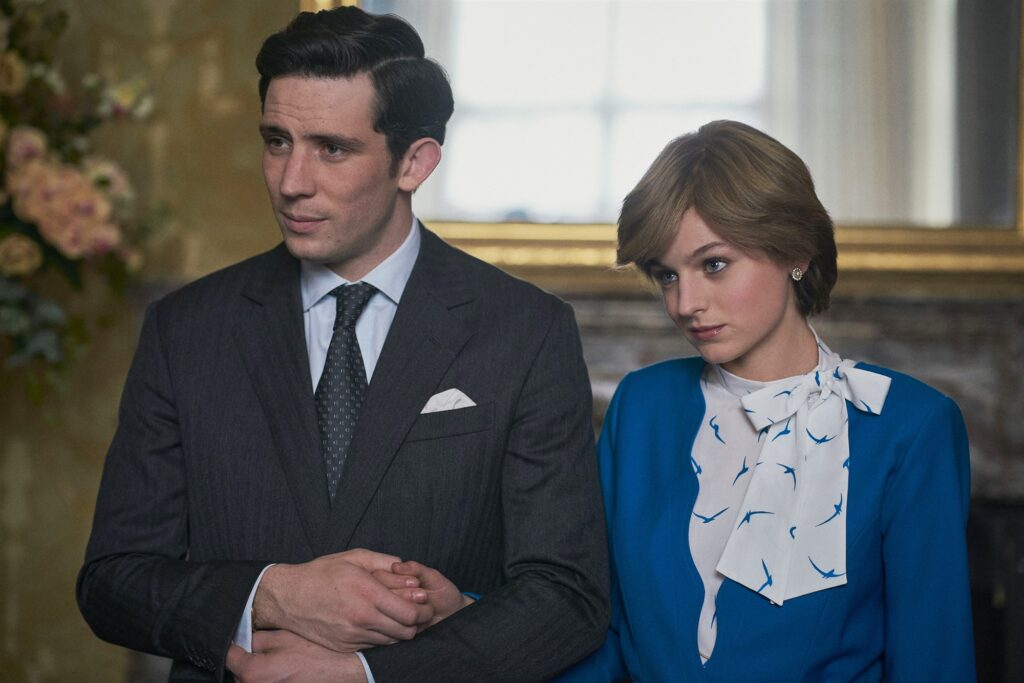 There is perhaps no greater moment of excitement for fans of The Crown than the arrival of Princess Diana. Four seasons in to a planned six-season run (briefly reduced to five before returning to its original course), Diana represents a turning point for the series, where period drama increasingly encroaches upon our modern era. As the Royal Family today endures controversies surrounding Megxit and Prince Andrew’s choice of friends, Diana’s popularity endures.

Surrounded by an exceptional cast including Olivia Colman, Helena Bonham Carter, and Tobias Menzies, Emma Corrin captivates as the young Princess of Wales. Corrin’s performance illustrates the complexities of Diana’s position both as an outsider to the Royal Family and as a figure who became a global sensation. Diana is a singular figure in modern culture. Corrin handles that immensely daunting task with nuance and grace.

Fellow season four newcomer Gillian Anderson takes on a similarly daunting task as Margaret Thatcher, in many ways the inverse of Diana for the purposes of The Crown. Thatcher is among the most hated politicians of the modern era, posing difficulties for a fictional depiction that’s bound to try and humanize the Iron Lady. Anderson is wonderful, occasionally bringing out those moments in the viewer where one’s emotions are tied up in an uncomfortable display of sympathy toward a figure known for her absence of humanity.

Season three often suffered from a lack of urgency to make the most of its ten episodes. Season four by comparison often has too much to do. Diana’s rise takes up much of the early episodes, intertwined with the Queen’s relationship with Thatcher. The Crown has always emphasized episodic storytelling within its broader narrative, but season four simply has better stories to tell. There’s nothing comparable to last year, when a whole episode was wasted on Prince Philip being fascinated with the moon.

Ten episodes is not a lot of time to spend on a group of individuals as complex and fascinating as the Royal Family. Prince Philip and Princesses Anne and Margaret see their roles greatly diminished, a necessary decision made in service to the season’s more compelling narratives. The Queen Mother (Marion Bailey) continues to be woefully ignored, a fascinating figure done a great disservice by The Crown.

Colman is finally given a chance to shine. Season three often sidelined the Queen in favor of the actions around her. Between conflicts with Thatcher and her responsibilities as a mother, the Queen has plenty to do this time around.

In many ways, Prince Charles is the true antagonist of the season, more so than Thatcher. Josh O’Connor does a fabulous job as the dour Prince of Wales, perpetually sulking over his marital problems and jealous of Diana’s enormous popularity. The Crown is hardly fair to the future King of England, who is depicted as fairly lazy and selfish. Stories need heroes and villains.

The Crown is not a documentary. Biopics almost always take large creative liberties with their subjects. Many articles are popping up over the inaccuracies of the events depicted, a fair correction of the record. One might feel a natural degree of sympathy toward how someone like the Duchess of Cornwall might feel at being seen as a vicious adulterer uncaring toward the mental wellbeing of a national icon. As bleak as it sounds, that shouldn’t really override the primary objective of The Crown, to produce compelling television.

Diana’s arrival gives The Crown a chance to recapture the magic of spectacle. Few series evoke a sense of awe and wonder quite like Morgan’s Royal Family fantasies. Historians can balk at the creative liberties all they want, but this is one of the most exciting shows on television. Truth need not be as important.