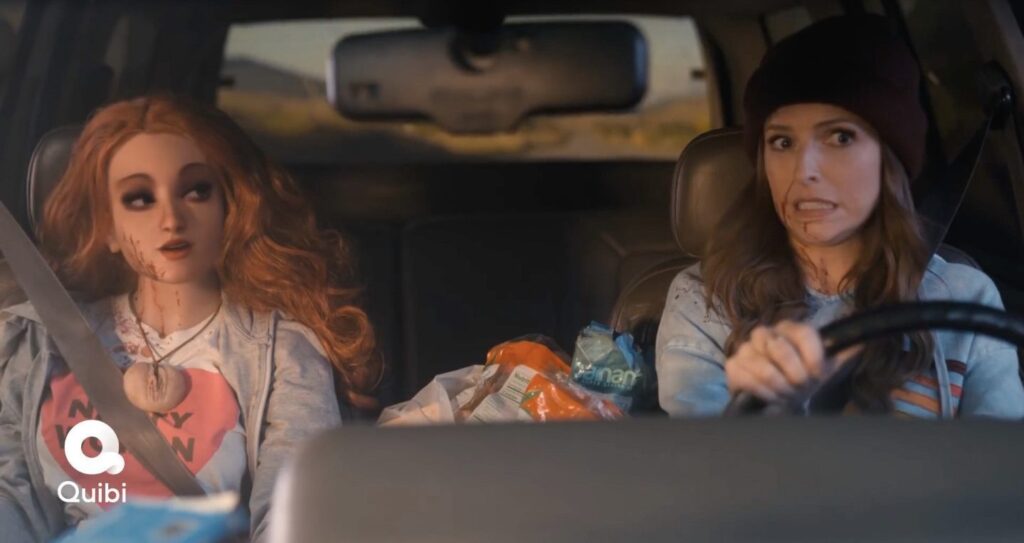 There are countless shows about people who make shows. Hollywood’s longstanding fascination with itself occasionally produces a gem, but the self-indulgence often comes at a cost. For a show like Quibi’s Dummy, based on creator Cody Heller’s real-life relationship with Dan Harmon, narrative is often substituted for an endless parade of winks at its audience.

Dummy follows the adventures of a fictionalized Heller, played by Anna Kendrick, as she develops a budding friendship with Harmon’s (Donal Logue) sex doll, voiced by Meredith Hagner. The sex doll, which Cody names Barbara, serves as a kind of motivational force for her middling career as a writer. Most of the shortform episodes center around the rapport between Cody and Barbara, functioning kind of like a buddy comedy.

The humor is pretty lazy. There are a few scattered laughs to be had from listening to Barbara’s vulgar antics, but the routine wears thin after the first couple of episodes. Heller writes plenty of surface-level jokes about feminism and the MeToo movement that play too hard for shock value. Absent is any sense of deeper truths uncovered from this line of thinking.

Heller displays a weird fascination with the Bechdel test, producing several painfully pedantic takes on the concept. It’s fairly unclear what she’s trying to say about any of this other than the rather obvious point that women can in fact be bad feminists. These revelations are neither insightful nor amusing.

The Quibi format hardly does Dummy any favors. The first few episodes contain way too many conversations that feel like they’re playing at 1.5 times the normal speed. This might be more forgivable if it wasn’t an artificial mandate for a show that could in theory be as long as it wanted. The back half of the season does mostly rectify this problem.

The episode runtimes don’t exactly provide much time for character development. Kendrick does a satisfactory job as a foil to the zany sex doll, but Heller as a character lacks any sense of depth. She’s an unmotivated writer in LA who never loses sight of the good fortune that’s been handed to her as a result of her romantic partner. It is unclear why anyone would think that this is a good formula for a protagonist.

Dummy grinds its superficial meta humor into the ground, a shallow inside joke packaged as a television series. Even for devoted Harmon fans, it’s unclear who the target demographic for this show really is, besides maybe their extended families. The fact that Heller does seem fairly self-aware only makes the whole experience even more disappointing.

« Classic Film: For Ever Mozart
Dead Still Is a Well-Crafted Period Drama with Plenty of Humor »