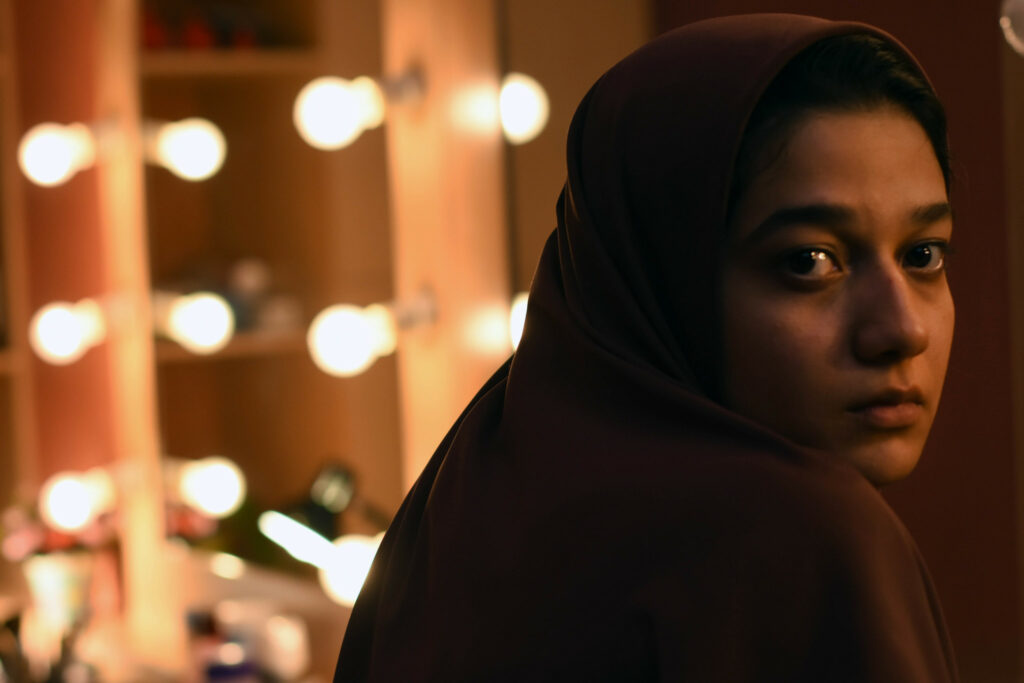 Sadaf Asgari appears in Yalda, a Night for Forgiveness by Massoud Bakhshi, an official selection of the World Cinema Dramatic Competition at the 2020 Sundance Film Festival. Courtesy of Sundance Institute.

Films like Yalda, a Night for Forgiveness shine a light on the complexities of justice. The idea of an “eye for an eye” is frowned upon in most societies, even Iran, where the practice is allowed. To beg for forgiveness under those conditions is to strike at the heart of humanity, mercy and vengeance existing at polar opposites.

Maryam (Sadaf Asgari) has been sentenced to death for the accidental murder of her much older husband Nassar. Her fate lies in the hands of Nassar’s daughter Mona (Behnaz Jafari), herself old enough to be Maryam’s mother, who alone can choose to sentence her to death or spare her life. Further complicating matters is the fact that Maryam’s fate will be decided on live television.

The film takes place almost entirely on the set where the reality show is filmed, where millions of people are watching to see whether Maryam will live or die. The audience themselves can play a role, texting their own verdicts to the show, the results of which could determine if the program’s sponsors will pay the blood money owed to Nassar’s family. A young woman’s fate decided in a similar fashion as American Idol.

Yalda, a Night for Forgiveness is a powerful film, striking at the heart of humanity through a jaded modern lens. The idea of a reality show determining a woman’s fate feels sickening, yet the film depicts the show in a compassionate manner. The show’s producer Ayat (Babak Karimi) and host (Arman Darvish) aren’t bad people looking to exploit Maryam, but to play the system they inhabit in a way that satisfies all sides.

The film largely succeeds on the back of Asgari, who demonstrates her range as an actress time and time again throughout the narrative. Understandably, Maryam resists the idea of playing into this absurd premise of begging for her life on national television. That is, however, exactly what’s expected of her. Asgari’s grasp on emotion is gut-wrenching, casting a light on the horrors of her reality. She cuts right through any perceived glamor of show business.

Jafari also does a great job as Mona, a woman with understandably conflicted emotions toward the younger woman who killed her father. In the heat of passion, it’s easy to call for someone’s head. The film understands the fleeting nature of rage, leaving Mona alone and clear-headed with the stakes of her decision.

Though the film takes place over the course of a single night, director Massoud Bakhshi packs a lot of story into the narrative. The audience gets a pretty good grasp of the events that happened, largely through an on-air back and forth between Maryam and Mona. The show never lets you forget that it’s not actually a trial, but it often functions that way.

Watching Yalda, a Night for Forgiveness is often an unsettling experience. Showbusiness and justice are not typically thought to go hand in hand. Bakhshi is extremely effective at presenting the dichotomy between Iran’s traditional approach to punishment and the modern method of carrying out that practice on reality television.

sundance yalda a night for forgiveness