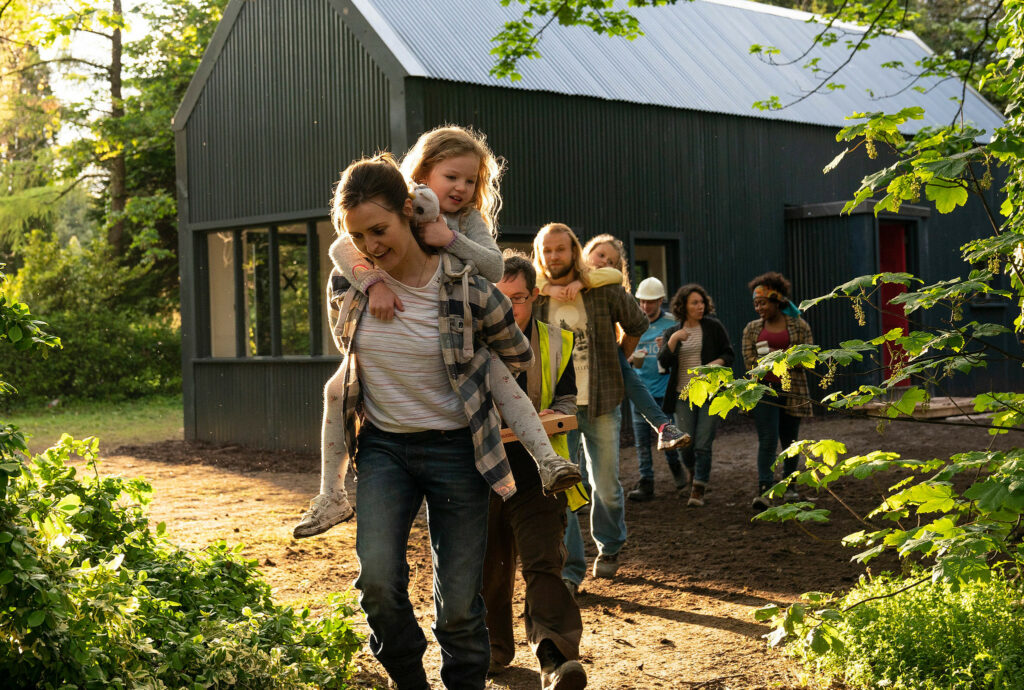 Clare Dunne and Molly McCann appear in Herself by Phyllida Lloyd, an official selection of the Premieres program at the 2020 Sundance Film Festival. Courtesy of Sundance Institute.

Herself is a film constantly wrestling with the concept of hope. No one wants to be defined by the single worst event in their lives, but reality has a way of forcing that dreadful nightmare down one’s throat. Money, children, and housing all complicate the idea of starting over, the stink of the past clinging like a piece of gum on the bottom of your shoe.

The film follows an Irish mother Sandra (Clare Dunne) in the wake of a horrific beating from her husband Gary (Ian Lloyd Anderson), who breaks her hand and gives her a black eye for trying to escape his clutches with their two young daughters. Sandra and the girls are placed in government housing, but Gary retains visitation rights. Even from afar, the monster retains a degree of power over Sandra’s life.

Seeking a more stable living arrangement, Sandra seeks to build a small home. While the government cares little for Sandra’s efforts to move off their assistance, her employer Peggy (Harriet Walter) steps in to graciously offer unused land in her backyard. Lost in the world of construction, she enlists the help of Aidi (Conleth Hill), a cranky old contractor, to help build her dream home.

The cast is pretty top-to-bottom solid, providing many feel good moments throughout the film. Molly McCann and Ruby Rose O’Hara shine as Sandra’s very young daughters, working with mature material. There are a bunch of minor characters who don’t receive much development, but the ensemble works well in the group moments.

Dunne carries the bulk of the narrative’s emotional weight. As the title suggests, Herself is a film about a woman striving for independence in a world that’s been anything but kind. Sandra is well-written, strong-willed but not stubborn. She asks for help when she needs it.

The film is a damning indictment of Ireland’s judicial system, one that allows Gary too much agency for an abusive creep. Anderson does a great job with Gary, giving a hate-inducing performance that gets under your skin.

Director Phyllida Lloyd manages the story well, frequently playing with the emotional tempo. Herself is a safe story that hits all the right notes. It rules over the strings with heavy hands, enjoyable yet predictable.

For this kind of material, that’s not really a bad thing. Sandra is a strong, inspiring character. Herself isn’t the most memorable film in the world, but one that works far more often than it doesn’t.