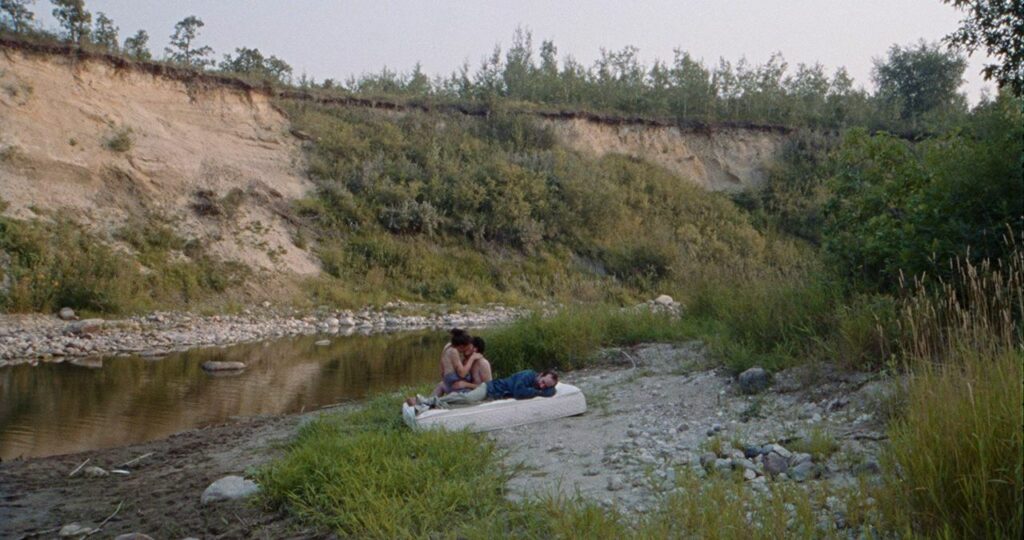 Films like Tapeworm force one to examine the very nature of the medium. The idea of taking what is essentially a collection of vignettes, in this case four fairly unrelated stories, and tying them together into something that looks like a film could sound like a puzzling proposition to a person who only engages with movies that follow the typical beginning-middle-end trajectory. There are no inherent rules governing how a narrative must work, even if we can understand that the vast majority of films play by this fairly accepted set of rules.

Set in Winnipeg, Manitoba, Tapeworm follows a number of fairly unhappy people being miserable. One character is a bad amateur standup comedian. Another plays video games in his mother’s home, refusing to help her put away the groceries.

The closest thing Tapeworm has to a protagonist is Adam (Adam Brooks), a man who’s convinced his wife is cheating on him. Like the others, Adam is a sad guy. He also thinks he’s sick. It’s kind of hard to blame his wife. After spending a little time with Adam, you’d probably want to cheat on him too.

The film is well-crafted. Shot on 16mm film, directors Milos Mitrovic and Fabian Velasco did a good job making Tapeworm look like the kind of indie film you’d stay up late watching in college. The Winnipeg scenery is also used well, exacerbating the misery that encompasses each of its characters. After watching the film, you’d probably never want to step foot in Manitoba.

The problem with Tapeworm isn’t that it’s a joyless experience. The film doesn’t make you feel anything at all. The characters aren’t compelling. They don’t do anything of note.

As the film progresses, you get the idea that the mundane is supposed to be the point. Trouble is, there’s simply nothing to be gained by watching characters kick soccer balls or buy Canadian flags with a marijuana leaf instead of maple. For a film hell-bent on presenting everyday life, it simply has nothing to add to the equation.

To its credit, Tapeworm isn’t a completely miserable experience. With a runtime of seventy-seven minutes, it can hardly be said that the film overstays its welcome. It’s the rare kind of awful film that’s so bad you can’t even really muster up any anger toward the waste of time. You can’t call Tapeworm overwhelming because the film isn’t capable of overwhelming anything.

Grab your Switch and your Nook Miles Tickets because we are going island hopping! Join ITM & special guest Nat Sowinski, comedian, organizer and coauthor of Pokey the Penguin, for a wide-ranging discussion on life in everyone’s favorite quasi-capitalistic utopia.

Ian & Nat tackle the broader philosophical questions that ACNH. Are Tom Nook & Redd former lovers? Is Isabelle a neoliberal? Why doesn’t Dodo Airlines chart mystery islands for return visits? What is Gulliver(varrr)’s deal? All of that and more!

Be sure to check out Pokey the Penguin’s latest adventures by checking out Pokey’s website https://www.yellow5.com/pokey/ & @pokeythepenguin