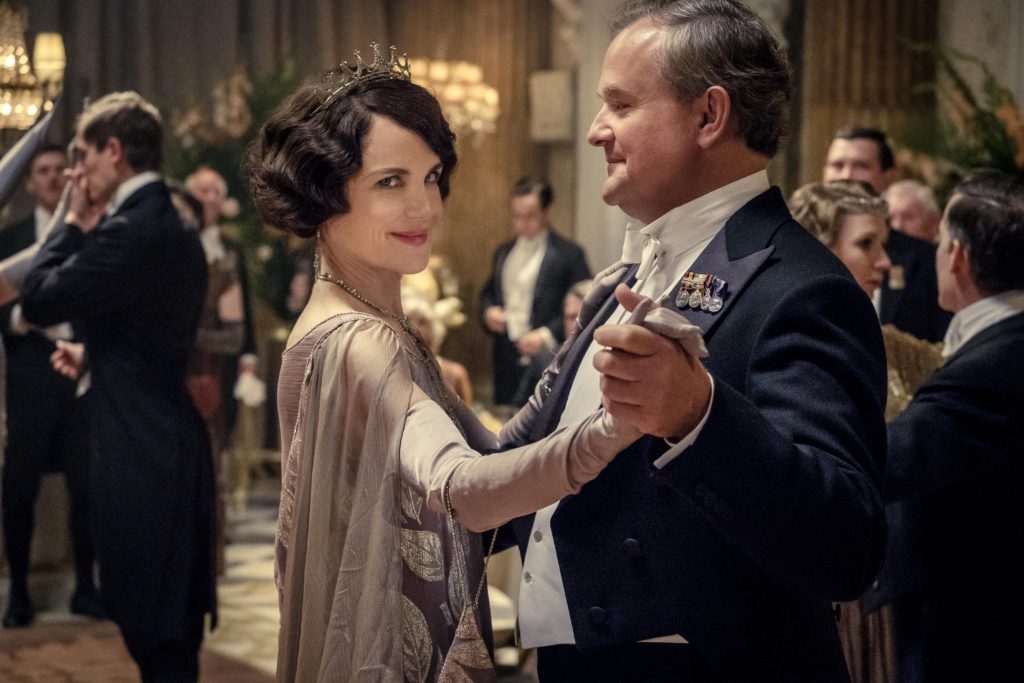 The series finale of Downton Abbey perfectly wrapped up the show in a way that left plenty of room for a return visit to the great country estate. For some, the film might seem superfluous, an unnecessary epilogue to a series that already saw a proper ending. The familiar sounds of Downton’s theme song coupled with the first shot of the beloved castle are bound to warm the hearts of dedicated fans eager for a few more hours spent with these characters.

To creator & screenwriter Julian Fellowes’ credit, he knows when to not tinker with a formula that already works. As a movie, Downton Abbey closely resembles the Christmas specials that capped off each series, a bit more of a cinematic feel than the average episode, but not much more. The extensive helicopter shots of Highclere Castle are just about the only aspect that set the film apart from its source material.

The film makes quick work of reassembling the pre-finale status quo of the series. Mr. Carson (Jim Carter) enjoys his retirement for all of five minutes before being summoned back to Downton. The post-service lives of Mr. Molesley (Kevin Doyle) and Mrs. Patmore (Lesley Nicol) are practically whisked out of memory. There are even kitchen maids present for the first time since the end of series five.

With the King and Queen set to visit Downton, the film finds itself a suitable plot to serve as the backdrop for all the side plots that make the series so beloved. As a show, Downton has always pulled off the big moments quite well, but the show has always been about the little moments. The film possesses all the trimmings of a feature while never losing sight of the smaller-scale magic between the characters that made Downton come alive.

As expected, there’s a fair amount of over-the-top melodrama that seemingly comes out of left field. Fellowes finds a way to include subplots for seemingly every single character, some that work better than others. Even the new characters, particularly the King’s attaché, find themselves with thoroughly fleshed out storylines.

There are a couple of plots that feel a bit stuffed in, clearly designed in service to the characters rather than the narrative. The Dowager Countess (Maggie Smith) is never short on one-liners, though, like series six’s overly-drawn out hospital plotline, her talents might have been better spent on a nobler cause. The absence of Henry Talbot (Matthew Goode) from the bulk of the narrative left Lady Mary (Michelle Dockery) to focus primarily on the visit, bound to disappoint those who wanted to see a bit more from the show’s leading actress. Lady Edith (Laura Carmichael), the often put-upon middle child of the Crawley family, supplies much of the emotional drama.

Like Lady Mary, Mr. Barrow (Rob James-Collier) finds himself looking like a bit of an odd-man-out despite being a central figure in the show’s narrative. Much of this is a product of the film’s desire to integrate his butler predecessor Carson back into the heart of Downton. Longtime fans of Mr. Barrow will undoubtedly find themselves smiling at the story carved out for the closeted servant.

Much of the narrative is totally over-the-top in a way that only seems fitting for a film designed solely to give longtime fans two more hours with the characters they love. There’s absolutely no learning curve present for newcomers to Downton, or even casual fans who might not remember where Daisy (Sophie McShera) left things off with Andy (Michael C. Fox) or the fate of Lord Grantham’s (Hugh Bonneville) valet Mr. Bates (Brendan Coyle) who spent much of the series accused of various murders.

The viewers who found the very idea of a Downton Abbey movie unnecessary will certainly remain unconvinced. For a show about change, the film seeks to uphold the status-quo as much as possible, only throwing a cursory glance toward the themes that drove the show. This story already has an ending.

For those of us who long for the Sunday evenings spent with the Crawley family and their servants, Downton Abbey hits practically every note. The narrative isn’t perfect, but Fellowes and director Michael Engler know how to give fans exactly what they want. Revivals often tinker with the formula just to switch things up. Downton Abbey plays the tunes everyone wants to hear, an immensely satisfying follow-up to one of the great television programs of the twenty-first century.