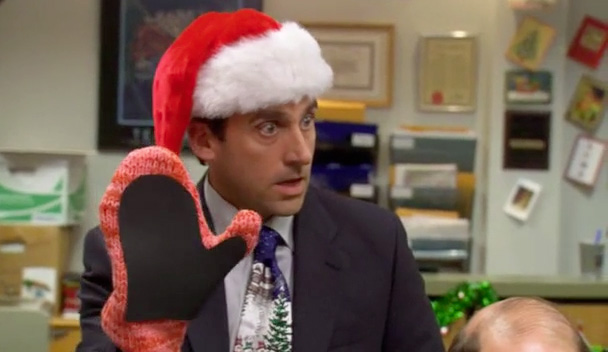 While Christmas episodes are common for many TV shows, there aren’t too many that have them as seasonal mainstays. Perhaps it’s especially appropriate considering the original UK series ended with a Christmas Special. Christmas at Dunder Mifflin represented a time for humor, plenty of feels, and an excuse to congregate under the mistletoe, while usually drunk off of vodka or beet wine.

This list ranks the seven Christmas episodes. Note seasons one and four did not have Christmas themed episodes, as one was only six episodes and four was during the Writer’s Strike. As with all of these sorts of lists, the rankings are somewhat subjective. I encourage you to debate my findings in the comment section if you disagree.

Surprise, surprise! “Christmas Wishes” was actually a high point in an otherwise terrible season, but it pales in comparison to most of the other Christmas episodes. The Jim/Dwight plotline deserves credit for putting a new spin on a tired gag, but ultimately the Erin/Andy mess drags the episode down.

It’s easy to forget how much of the show’s later seasons were tied up in the Andy/Erin romance, which was never as interesting as the show wanted it to be (it’s also featured prominently in “Secret Santa” and “Dwight Christmas,” despite the latter’s lack of Andy). This is an entertaining episode, but it’s easy to see why it’s at the bottom of the list.

“Moroccan Christmas” is another Christmas episode that doesn’t get much of its laughs from its A plot. Michael’s attempted intervention for Meredith wasn’t as funny as it could’ve been and probably should have been relegated to a different episode. Phyllis seems somewhat uncharacteristically mean in this episode, though as “Secret Santa” also shows that this tended to happen in isolated cases.

Dwight’s unicorn toy plotline provides the laughs from a storyline perspective. This episode is fueled by superb Kevin and Creed lines and also from Michael’s attempt to invent new mixed drinks such as the orange vod-jus-ka. Depending on how you feel about Andy, his embarrassing moments are also quite entertaining.

Being hour-long episodes, “Classy Christmas” and “A Benihana Christmas” are somewhat difficult to place as it’s harder to compare them to the regular length episodes. “Classy Christmas” is light on laughs as it focuses primarily on the return of Holly. As her return signaled the beginning of the end for Michael, this is certainly understandable.

It’s effective in its mission to tug at the heartstrings. The Jim/Dwight dynamic is hilarious while the Daryl subplot falls flat. Ultimately there’s enough here to like, but not as much to love. Besides Jim freaking out in the parking lot as he anticipates a mass snowballing from Dwight of course.

This might be the best episode of the Michael and Jim as co-manager era, depending on how you feel about the morality of “Scott’s Tots.” Michael’s reaction to Phyllis as Jesus is Michael at his best. Angela supporting the presence of Jesus at the party was also a great subtle gag.

The episode also does a great job of showcasing some of Dwight’s subtleties. He’s not sparring with Jim or acting especially crazy, but he’s entertaining nonetheless. Phyllis threatening to bring Bob Vance into the equation was also hysterical. The big news of the sale of Dunder Mifflin was a nice touch and didn’t take away from the jokes at all.

The other Christmas episode to feature Michael feeling sad about a woman is also the other double length episode. This episode is also the first to really showcase Andy’s true character to someone other than Jim and Karen (which isn’t always a good thing). Jim and Pam pull off one of the most memorable Dwight pranks, which was surprising since Jim was dating Karen at the time.

The Jim/Pam tension along with Michael’s somber tone had a lot of potential to derail the laughs. But they’re pretty consistent through the extended episode. The highlight is without a doubt when Michael marks his date with a sharpie to tell her apart from her friend.

This is the pick I’m going to get the most slack for without a doubt. While the show took a dive after Michael left, season 9 had quite a few standout episodes. But with the exception of the finale, none were as memorable as “Dwight Christmas.”

This episode serves as both a tribute to past Christmas episodes and a reminder as to why these were so cherished in the first place. Dwight’s “traditional” family Christmas was hilarious and the Jim/Pam moments were their highpoint in an otherwise shaky season for the couple. Daryl also shines as he drunkenly broods over Jim’s apparent neglect with regards to the Philadelphia sports job.

This one doesn’t need much explaining. Yankee swap is classic Michael as is his overspending on a gift coupled with his disdain for Phyllis’ homemade oven mitt. Creed’s old man coat rivals Kevin’s foot bath (a gift for himself) for best gift of the episode.

“Christmas Party” also features some of the best Jim/Pam moments and played a big part in their eventual courtship. This episode is more than just the best Christmas episode, it’s one of the best of the whole series. The only thing that could have made it better is if Dwight kept the teapot to use nasally in future episode.

So there are the rankings. Disagree with my order? Comment below. Since it’s the Holiday season, I figure I can get away with pointing out that my book, Five College Dialogues, makes a great gift. Cheers!