TIFF Review: The Power of the Dog 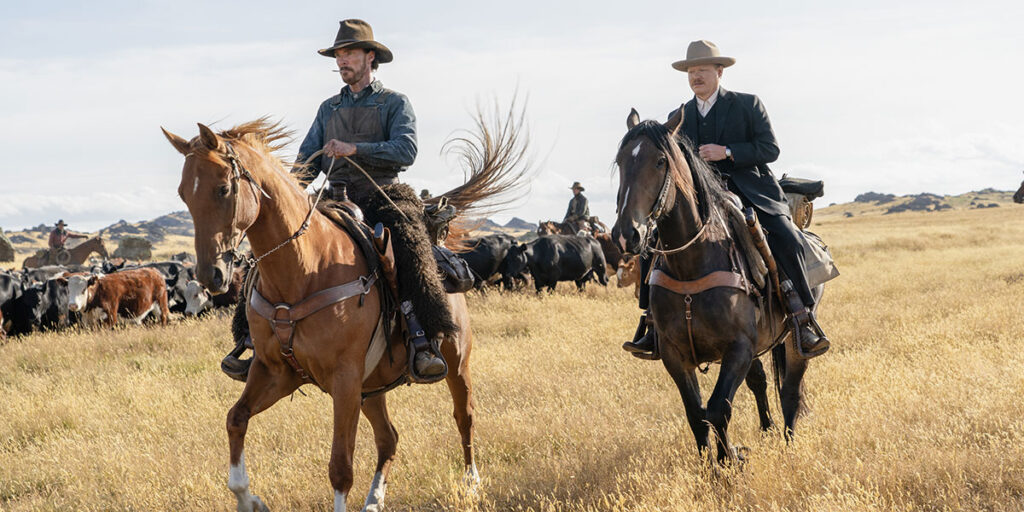 The past twenty years have seen the rise of the antihero, protagonists who are easy to love in spite of their moral ambiguity. With that narrative trope firmly played out, Jane Campion ups the ante with The Power of the Dog, a film that largely operates without any specific character for the audience to identify with. The picturesque queer Western is a remarkable return to feature films for the director after a twelve-year absence.

Based on the 1967 novel of the same name, the film follows Phil Burbank (Benedict Cumberbatch), a colorful yet highly unpleasant rancher, working with his brother, George (Jesse Plemons), raising cattle and horses 1925 Montana. George is the opposite of Phil, polite and soft-spoken, determined to not let his brother’s rude demeanor soil their family name. It is during one of these image rehabilitation tours that George makes the acquaintance of Rose (Kirsten Dunst), quickly falling in love. The two marry, bringing Rose and her son, Peter (Kodi Smit-McPhee), permanently into Phil’s orbit.

Structured with numbered chapter markers breaking up the film, Campion untethers her narrative from any set anchor point. Cumberbatch is the closest thing the film has to a true lead, but much of the first half is spent focusing on Rose, before setting up the eventual pairing of Peter of Phil, the latter of whom spends much of the narrative mocking the former’s awkwardness and fragrant homosexuality. Phil is pretty gay too, a reality that clearly rips him apart.

Campion’s slow-burn refuses to conform to any conventions of narrative, backed by a career-best performance from Benedict Cumberbatch. Phil is not a protagonist, giving the audience nothing to root for, existing for nothing other than cruelty. There is also a sweet side to Phil, with Cumberbatch finding easy chemistry with Smit-McPhee. Campion assigns no ulterior motive to Phil’s softer demeanor for story purposes, instead of giving Cumberbatch the floor to use his ample acting talents.

The Power of the Dog is reluctant to fully commit to any single narrative strand. Much of Rose’s arc follows her gradual decline into alcoholism, but Campion seems to lose interest in exploring this story, sidelining George for most of the second half. Filmed in her native New Zealand, its breathtaking beauty constantly on display through the luscious cinematography, the ranch essentially functions as a character in its own right.

The loneliness of rural living is well-documented. Adding a layer of repressed homosexuality in 1925 into the equation, it’s easy to see how isolation can warp one’s entire existence until there’s nothing left but bitter resentment. As Phil, Cumberbatch so beautifully embodies that angst. He’s easy to hate because he’s a pretty bad person, but neither Campion nor Cumberbatch are super invested in making you feel otherwise.

Many may find Campion’s approach to storytelling off-putting, a singular approach to pacing that’s never in a hurry to get anyway in particular. The story leaves a bit to be desired by the time the credits roll, but with the top-notch acting and beautiful cinematography, it’s hard to care. Few films so abundantly translate the message of a director who takes such joy in her craft.

the power of the dog tiff