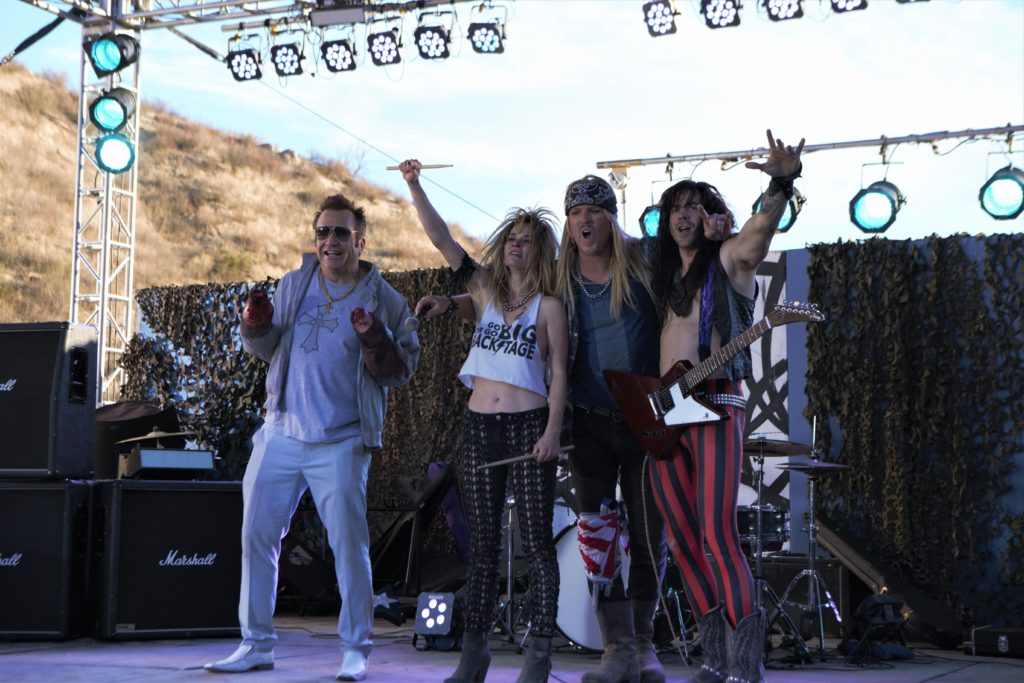 Part of the appeal of b-movies lies in their innate ability to redefine the parameters of expectation that audiences naturally take with them when sitting down to watch a film. The “so bad it’s good” trope reflects the fact that entertainment value can occasionally circumvent the typical binary we use to judge art. Dead Ant is a film acutely aware of this sentiment, embracing camp in favor of anything resembling a coherent narrative.

The plot of Dead Ant is fairly straight-forward. A washed-up hair metal band on its way to a music festival runs into a nasty insect problem after a pit-stop for psychedelic drugs. The cast of characters is fairly intimate, mostly featuring the members of the band Sonic Grave, including Sean Astin, Jake Busey, Rhys Coiro, and Leisha Hailey. Tom Arnold, co-star of the 90s hit True Lies, puts in a strong performance as band manager Danny, delivering most of the film’s memorable comedic lines.

The film struggles through its first half-hour, full of dated clichés about political correctness and power ballads. The idea that a hair metal band would be searching for a “comeback” in the late 2010s, decades after the genre’s heyday, is an absurdity that the film could’ve wielded to its comedic benefit, especially since none of the members look old enough to have been in a band in the 80s. Thankfully the jokes start connecting by the second act, timed well with the introduction of the titular ants.

Dead Ant finds its groove once it trades in the clichés for camp comedy, delivering several laugh-out-loud moments. There’s a point where Arnold starts to look more comfortable in his role, dropping one hilarious line after another in rapid succession as the characters start to fight back against the ants. Coiro is another standout of the film’s second half, owning his ridiculous scenes with a healthy dose of charm, like he finally figured out what the film was supposed to be. Dead Ant is the kind of movie that owes its success largely due to its actors’ willingness to embrace the film’s absurdities.

The script is a bit disjointed at times, but the actors find grace even with the occasional tumble through their lines. The plot holes are transformed into amusing comedic moments, embracing its own inconsistent continuity. In a strange way, the errors serve to heighten the film’s replay value, if only to see if there’s more lurking in the ant-riddled desert.

While few b-movies are known for their stellar special effects, Dead Ant actually exceeds expectations with plenty of pretty believable ants. There are a couple scenes where the digital ants hardly line up with the havoc they’re supposed to be causing, but in a way that’s part of the fun. The film never lets the effects distract from other comedy it’s trying to deliver, maximizing its assets in the process.

Clocking in at just under ninety-minutes, Dead Ant provides plenty of laughs without ever overstaying its welcome. The first half-hour is regrettably underwhelming, but the film course corrects with enough time left to provide an entertaining experience. If the idea of a b movie filled with hair metal and giant killer ants seems like your cup of tea, you won’t be disappointed by this weirdly endearing film.

« PEN15 Is One Of Hulu’s Best Original Shows
Alita: Battle Angel Is a Collection of Stunning Visual Sequences That Lacks a Cohesive Story »