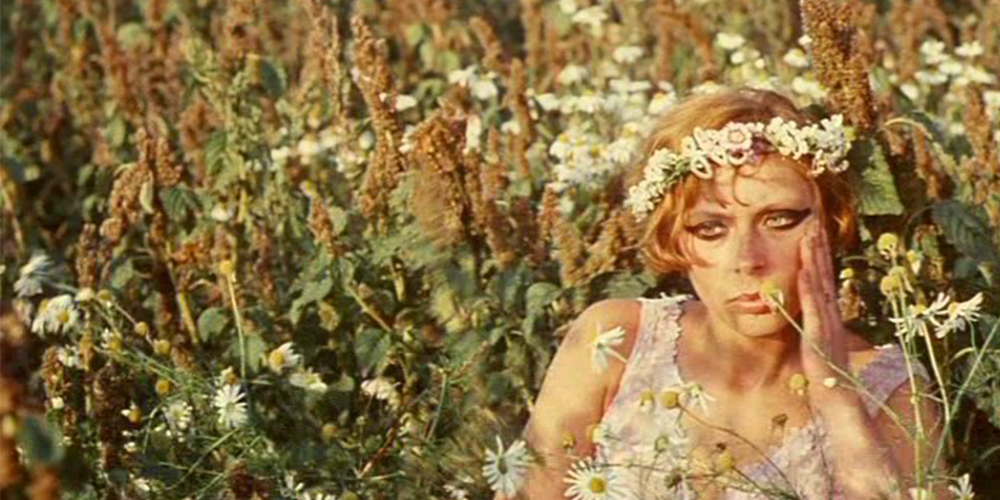 Countless films have examined the futility of capitalism to deliver its promise of a meaningful existence onto the proletariat. The exertion of labor may keep a roof over one’s head, but the use-value of being a cog in the machine rarely provides that elusive sensation called happiness. Life has got to be more.

The 1966 film Daisies (original Czech title: Sedmikràsky), examines the lives of two women, both named Marie (Jitka Cerhová and Ivana Karbanová), who are seemingly unmoored from the mechanics of society. Living lives of decadence and idle play, the Maries frolic through their village, rolling down hills and convincing old men to buy them extravagant dinners. Life is what the Maries make of it, assuming there’s an easy mark around to foot the bill.

Director Věra Chytilová makes great use of the full sensory arsenal at her disposal as a filmmaker. Daises includes numerous sequences that rely solely on color and sound play, the idea of a narrative barely entering the equation. There is no real plot or single concrete idea anchoring the film, but Chytilová works with such a careful sense of deliberation that she manages to keep the audience thoroughly engaged through the brisk 76-minute runtime.

The two Maries exist both as individual characters and two sides of the same coin. Much of Daisies’ charm stems from Cerhová and Karbanová’s impeccable chemistry, often moving in complete synchronicity with one another while their characters remain fundamentally unaligned with each other. The Maries’ brand of self-centered living leaves little room for each other, but the desire for companionship is a natural human phenomenon. The two actresses do a remarkable job exploring their unusual dynamic against the backdrop of a film that is never particularly concerned with telling a story.

Chytilová pulls off the impressive feat of deconstructing capitalism without succumbing to the natural urge to offer a replacement. The system is not designed to crumble at the hands of a single arthouse film, even one designed solely to poke the eyes of the kinds of conservative governments that spent decades trying to censor such material. The wheels of capitalism will keep churning long after the credits roll.

The Maries do not live particularly meaningful lives, occasionally unwittingly playing a part in capitalism’s unending game. Anarchy, almost by definition, has no better alternative. Daisies is an amusing romp through a myopic fairytale. The Maries only pay lip service to the idea that they should be worried about tomorrow. Their antics, while amusing, do not plant any grandiose ideas in the audience’s head about alternatives to the endless cycle. The best lesson that Daisies leaves behind lies in the value of deviating from the norm, if only for a little while. We cannot exist independently from society, but we can challenge the status quo at every turn.