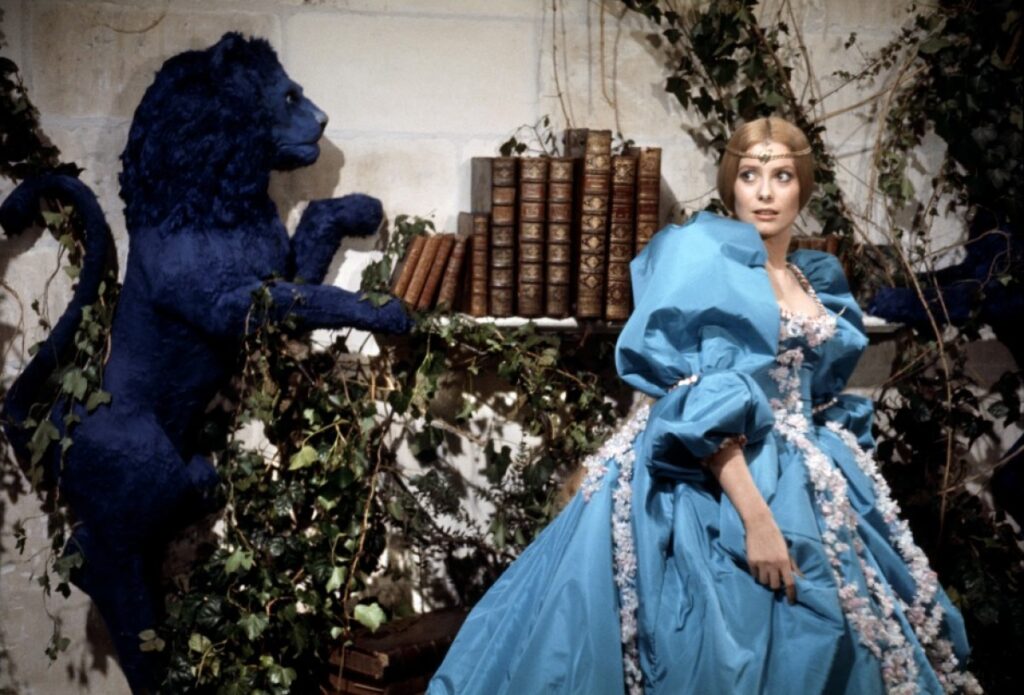 Plenty of fairytales, especially the centuries-old sort, contain plotlines that come across as quite problematic in modern times. Sleeping Beauty saw resolution through a nonconsensual kiss, Cinderella escaped an abusive household through marriage, and the Little Mermaid traded her voice, her agency, to be with a man. Traditional heteronormative storytelling once made it easy to gloss over these decidedly sexist tropes.

The French tale of Donkeyskin puts other fairytales to shame with its very premise. A princess flees her household after the king decides he wants to marry her, his own daughter, after the death of the queen. The fact that the kingdom earns its wealth through a donkey that defecates gold and jewels plays a natural second fiddle to incest in this scenario. The 1970 film Donkey Skin (French title: Peau d’âne) does not really try to make sense of the narrative, but rather to simply entertain its audience along the way.

As the titular princess “Donkey Skin,” Catherine Deneuve puts forth a captivating effort. Donkey Skin finds herself often lost in the absurdities of her surroundings, but Denevue engages with the terrain in a way that makes it easy for the audience to follow along. It’s a silly kind of story, but one presented with passion and obvious delight.

Director Jacques Demy paints vivid landscapes from the castles to the wilderness where Donkey Skin seeks refuge. The script is serious when it needs to be, but never loses its wit, finding great satire in the fairytale genre as a whole. The film’s musical numbers poke fun at the era, full of vanity and casual cruelty.

The costumes are gorgeous, completely over the top. Each royal character’s wardrobe looks like it was designed to achieve maximum flamboyance, layers upon layers of excess. For a musical comedy, Donkey Skin is a so visually delightful that you could practically enjoy it on mute.

The film has plenty of head scratching plot holes, the product of a script with minimal regard for developing its characters or narrative. The story is content to be pretty boiler-plate, moving along briskly over the course of its ninety-minute runtime. Demy has a firm grasp of pacing, throwing plenty at his audience without lingering in one spot for too long.

Refreshingly absent is any sense of moral purpose. Donkey Skin relishes its lavish costumes and beautiful imagery while keeping its narrative light and fluffy. It’s a charming film that lovingly adapts a bizarre story. Some fairytales find themselves bogged down in complications born of problematic scenarios.

Donkey Skin is the kind of story that’s weird to an extent that you wouldn’t even want to even talk about its core dilemma. Incest is not generally the kind of topic that makes for casually silly material. Demy relishes in presenting the eccentric, crafting the kind of film that can’t help but endear itself to its audience.