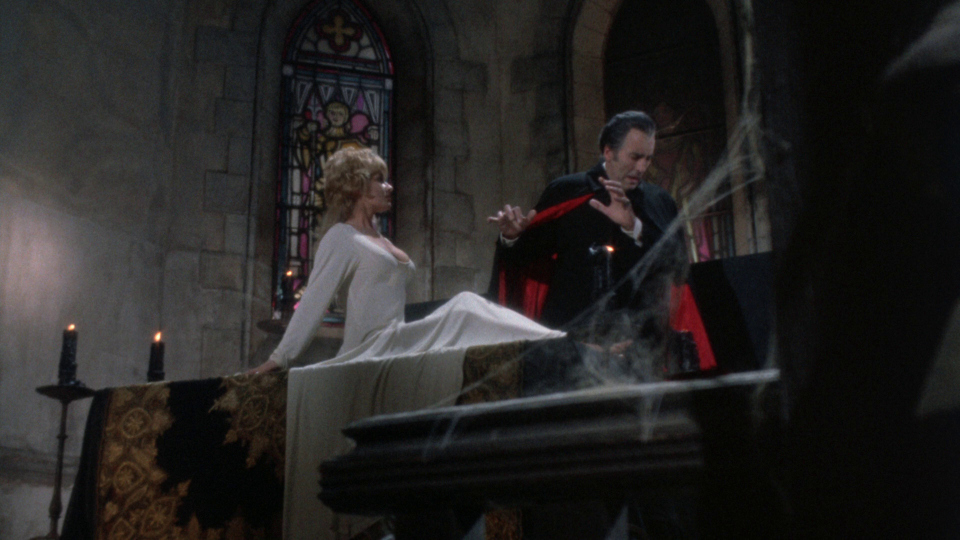 Canons cannot be constructed contemporaneously, an academic construct that takes on a life of its own, even as plenty try to influence its narrative trajectory through the annals of time. Dracula A.D. 1972 was not a film crafted with careful regard to how its place in Hammer Horror lore might be viewed fifty years down the road. Few could have predicted that its leads Christopher Lee and Peter Cushing would grow to become iconic figures in the broader genre, with extra attention given to the few releases where the pair appeared together. Legacy and inception serve two different masters, the latter understandably preoccupied with its present, unconcerned with how its overwhelming mediocrity might be perceived by future generations.

Dracula A.D. 1972 presents an interesting premise, taking its title character out of his accustomed period setting, at least in theory. Dracula (Lee) doesn’t really engage with the seventies at all, largely kept confined to a deconsecrated church that housed his resurrection proceedings. A group of bohemians gathered inside the decaying St. Bartolph’s Chruch, which conveniently housed the gravesite of Dracula’s iconic nemesis Lawrence Van Helsing (Cushing), to do drugs and maybe resurrect a long-dead vampire. Johnny Alucard (Christopher Neame), with a cringe-inducing last name that’s merely Dracula spelled backward, manages to succeed, though terrifying his hippie posse in the process. Among them is Van Helsing descendant Jessica (Stephanie Beacham), who lives with her grandfather Lorrimer (also Cushing), an occult expert.

The film largely follows the investigation of the death of Laura (Caroline Munro), killed by Dracula shortly after his resurrection. Inspector Murray (Michael Coles) enlists Lorrimer’s help to piece things together, while the hippies, unaware of Laura’s death, return to their nightclub for 1970s antics. The narrative never quite settles on a definitive lead, initially positioning Jessica as its clearest protagonist before later favoring the tandem of Lorrimer and Murray. Horror movies are not necessarily known for their character development, but the film never makes much of an effort to get its audience to care about a single one of these characters.

Much of Dracula A.D. 1972’s shortcomings can be blamed on its failure to deliver an adequate follow-up sequence to the excellent 1958 Dracula that first paired Lee and Cushing. The film opens with an interesting 1872 battle sequence between Dracula and Lawrence, hinting at an eventual showdown between Dracula and Lorrimer, that never quite comes to fruition. Lee and Cushing barely share the screen together, a shortcoming that sinks the entire experience far more than its forgivable campy aesthetics.

Lee and Cushing, two of Hammer Horror’s most iconic talents, appeared opposite each other three times in Dracula films. Dracula A.D. 1972 fails to recognize its best asset, keeping the two apart for no apparent reason, a wasted opportunity to add to the rich Hammer Horror canon. The then-modernity of the narrative could’ve aged remarkably well over time, if the film had done the basic work of crafting a passable story. Instead, the audience is handed a half-baked detective narrative spliced with some hippies, and its title character marginalized in a location sorely lacking the rich gothic beauty seen in Cushing and Lee’s original Dracula appearance.

Dracula A.D. 1972 could have been fun camp. Countless B-movies have been forgotten in time, but audiences fifty years down the road continue to engage with this turd because of its star power, hoping in vain for another showdown between two titans of the genre. The canon keeps Dracula A.D. 1972 relevant despite its tedious attempt at a narrative, lacking the confidence to elevate itself above the bare minimum required to call itself a film.

« House of the Dragon delivers a gripping finale that brings its first season full circle.
Black Panther: Wakanda Forever pays tribute to Chadwick Boseman while setting its own course for the future »