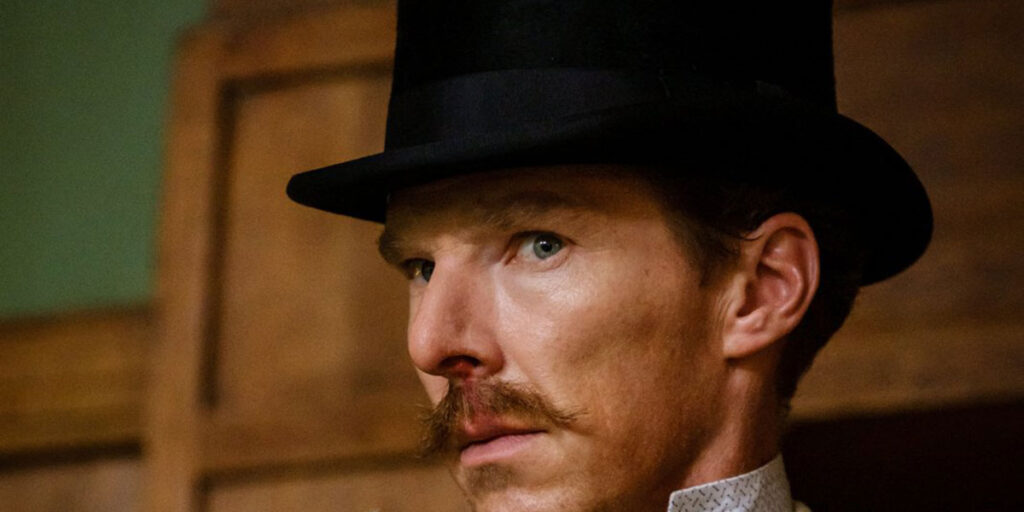 Cat pictures are one of life’s great simple pleasures. The artist Louis Wain helped popularize portraits of adorable felines in the 1800s, a time when they were regarded as nuisances, good for little other than mice control. The film The Electric Life of Louis Wain presents a colorful yet deeply sad perspective of his troubled career.

Benedict Cumberbatch delivers a solid yet abundantly predictable take on the eccentric artist, institutionalized late in his life with schizophrenia, a widely disputed diagnosis. The death of their father left Wain as the reluctant patriarch of his family, using his ability to draw at breakneck speed to find employment at The Illustrated London News working under Sir William Ingram (Toby Jones), a kind man with a heavy tolerance for Wain’s often outlandish behavior. Wain is under great pressure to provide for his mother and overbearing sisters.

The only person in the world who seems to appreciate Wain for all his eccentricities is Emily (Claire Foy), who works as a governess to his sisters. Wain quickly falls in love, despite the scandalous nature of a romance between lovers of differing social statuses, earning the scorn of his whole family. Louis and Emily have a happy, albeit brief marriage, tragically cut short by Emily’s terminal breast cancer diagnosis. It is in the wake of tragedy that Wain finds his greatest successes drawing pictures of cats, inspired by his wife’s love of felines.

Director Will Sharpe bites off more than he can chew with an overstuffed narrative that struggles to build off its whimsical first act. The film does an excellent job capturing the melancholic aura of Wain’s life, fleeting feel-good moments amidst an ocean of tragedies. The biographical nature of the story presents numerous pacing challenges that Sharpe manages to navigate with relative grace.

Sharpe deploys a narration by Olivia Colman that aims to give the narrative the feeling of a fairy tale, a device that feels a bit like a liability as time goes on. Wain’s life is not a good fit for a 111-minute runtime, a series of highs and lows that doesn’t flow well within a three-act structure. By the midway point, the narration feels almost obligatory, a weird reminder that this is all a performance.

Cumberbatch feels almost too comfortable playing yet another eccentric genius, bringing nothing new to the table. It doesn’t help that Cumberbatch’s best scenes are all opposite Foy, whose character dies halfway through the film. 111 minutes is a long time for a narrative that achieves most of it what it set out to achieve before the third act.

Sharpe can be forgiven for not necessarily knowing how to fit Wain’s whole life into a feature film. His biggest fault is in his failure to craft three-dimensional characters out of Wain’s sisters, who essentially function as the film’s antagonists. Wain is distant from his family in a way that feels more like an impediment for the narrative than an organic part of the story.

The Electric Life of Louis Wain is probably not more fun than spending two hours looking at cat pictures on Instagram, but it’s a competent biopic. Sharpe and Cumberbatch don’t exactly impress with their handling of the material, but the two make an admirable effort. Wain lived a tragic life, but there’s much inspiration to be found in the way he channeled his grief into a medium that brought so much joy to many.