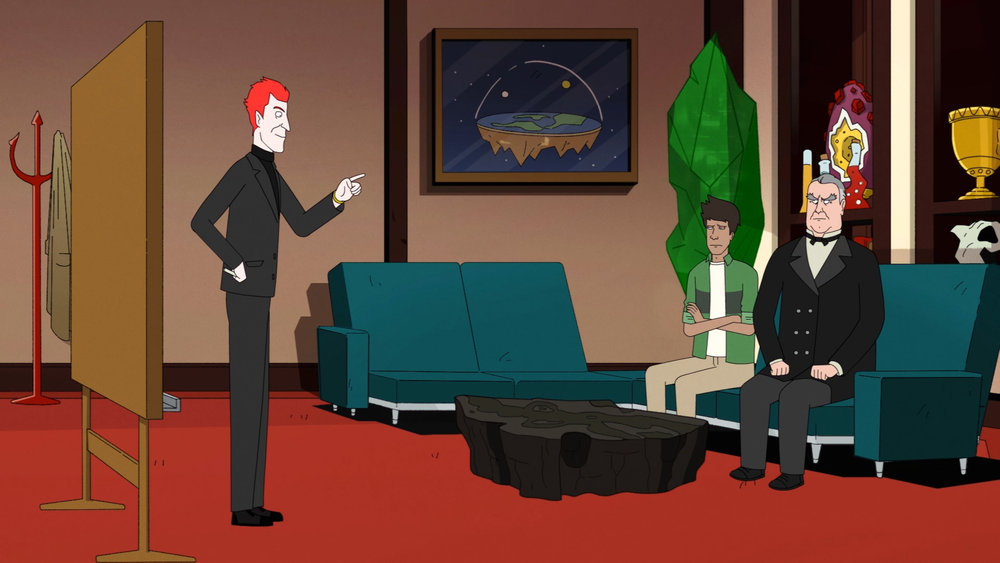 The past year has had a tendency to make one rethink the literal visualization of hell of earth. If hell was meant to evoke fear, the idea of a warm place larger than one’s living space might instead bring about some envy from a reasonably-minded individual. The hell crafted in SyFy’s new animated series Devil May Care looks like a pretty cool place to be.

The series follows Beans (Asif Ali), a millennial facing eternal damnation in a rosy-colored interpretation of hell. Beans finds work as the social media manager for Devil (Alan Tudyk), ever concerned with the public relations branch of his fire and brimstone empire. Beans’ coworkers in Devil’s office include Head Demon Gloria (Stephanie Beatriz) and President McKinley (Fred Tatasciore), who acts much like Devil’s personal valet.

Created by Robot Chicken head writer Douglas Goldstein, Devil May Care essentially functions as part workplace comedy, part social satire on modern America. There’s a lot of humor centered around social media’s effects on our psyche and Devil’s efforts to make his kingdom more hospitable for his constituents. Ali and Tudyk have great chemistry, elevating Beans beyond the function of the straight man at the heart of the narrative.

Goldstein pulls off an impressive feat for comedies with eleven-minute runtimes, a format that generally puts a fair bit of strain on the balance between jokes and character developments. The world-building is welcoming, a space where you want to spend time with the characters rather than merely laugh nonstop until the credits roll. There’s a relatable sense of found family to be had in this merry bunch of misfits.

Much of that dynamic is thanks to Devil, a heartfelt character with a lot of depth, perpetually enhanced by Tudyk’s range as a performer, delivering each line with a sinister sense of delight. The hell of Devil May Care isn’t for the evil, but rather the flawed and imperfect. The sinners aren’t just more fun than the saints, they’re the people you’d rather spend your time with.

Which isn’t to say that Devil May Care spends its time grappling with morality or life’s heavy questions. It is first and foremost a late-night comedy that exists to make you laugh. On that front, it succeeds quite well.

Laughter isn’t the only escape hatch that entertainment can seek to provide. There’s a sense of community sorely missing for too many this past year. It is easy to feel like we are living in hell, albeit a landscape that looks quite different than the palette put forth by Devil May Care. Created before the pandemic, the show rises up to a challenge that it wasn’t expected to face in providing a sense of relief to people who have had to lean on comedy quite a bit lately to give comfort where it cannot be found anywhere else.

Hilarious and thought-provoking, Devil May Care packs quite a punch with each episode. Night and day from Goldstein’s work on Robot Chicken, the show doesn’t necessarily swing for the fences with each line like the iconic Adult Swim staple, but each episode constantly challenges the confines of storytelling within the short-form medium. It might be a better binge than a week-to-week series, but animated comedy fans will find plenty to enjoy in this warm series.