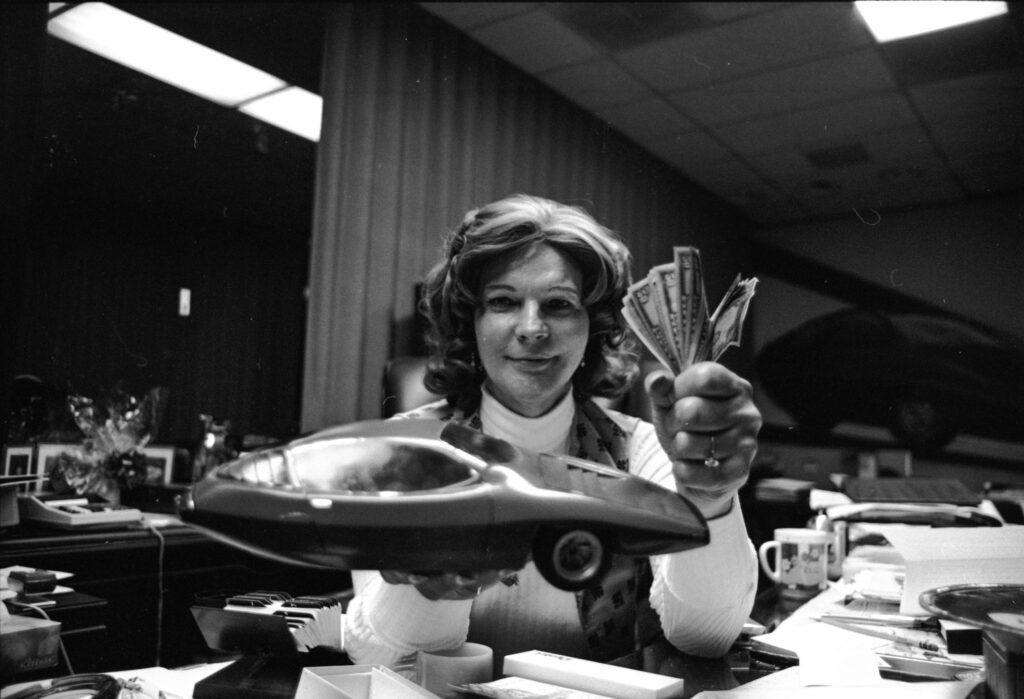 Trans people often have to deal with people claiming that the trans identity is some sort of “new” phenomenon, despite all the history to the contrary. The life of G. Elizabeth Carmichael is a pretty wild story even before you take her gender identity into consideration. The new HBO four-part documentary The Lady and the Dale offers a wide-ranging portrait of a colorful American life.

True to its title, the series largely splits its attention between Carmichael and the Dale, a three-wheel automobile designed to be the flagship offering for Carmichael’s Twentieth Century Motor Car Corporation, which fizzled out in the late 1970s amid criminal fraud charges for Carmichael. The life of Carmichael and the Dale itself would make for fascinating documentaries in their own right, though co-directors Nick Cammilleri and Zackary Drucker do an excellent job weaving the many strands of their story through the four episodes.

Carmichael, a skilled con artist from an early age, makes for a fascinating subject. Though Liz died in 2004, interviews with her family, as well as archival audio tapes provide a thorough examination of her as a person. Carmichael is a complicated figure, a loving mother and a force of nature in the business world, flying a bit too close to the sun with some of her ambitions.

The series uses extensive cut-out animation to liven up some of the archival footage. This approach makes the experience a bit more colorful, while also adding to the emotional resonance of the material. The pacing is quite exceptional, a highly-bingeable experience that leaves you hungry for more at the end of each episode.

Trans people are frequently accused of deception by our very existence. For Liz, a trans woman, this dynamic is complicated by the fact that she was a literal con artist. Her story, especially her prosecution, exposes some of the ways that marginalized people are treated differently both by the justice system and the public at large. Cammilleri and Drucker spend a lot of time on the media reception to the case, including some fascinating interviews with some of the newscasters who worked on the story.

Popular culture is filled with con artists like Jordan Belfort, celebrated by many for their bombastic greed. Shows like Billions and Succession revel in their protagonists’ abilities to game the system. People like Liz Carmichael get treated differently, not necessarily because of the particulars of their crimes, but because of who they are as people.

Which isn’t to say that Liz Carmichael was actually a hero or that she didn’t deserve to be prosecuted for violating securities law among plenty of other offenses. Liz Carmichael did bad things, but The Lady and the Dale isn’t concerned with judgement, providing testimony from her relatives and former employees that paint a much fuller picture of the woman.

In her own way, Liz was a trailblazer. Trans people still face rampant employment discrimination. To see a woman like her take on the big auto companies can give inspiration to anyone looking to carve out their own mark on the world. For too long, women have been told we can’t succeed in a men’s world. Much of Liz’s problems were her of her own making, but she had some impressive achievements. Above all else, Liz lived her life on her own terms.

The Lady and the Dale thoroughly explores a complicated figure in trans history, a fascinating glimpse at a rebel who dared to dream big. One may not necessarily aspire to be like Liz, except in the courage she exhibited to live her truth and ask for more. Being out can be hard enough sometimes. To remove the weights of discrimination will hopefully create a world where more trans people can wield the power that Liz held, if only for a moment.

hbo the lady and the dale zackary drucker

« Zackary Drucker, director of The Lady and the Dale
Sundance Series: Doublespeak »