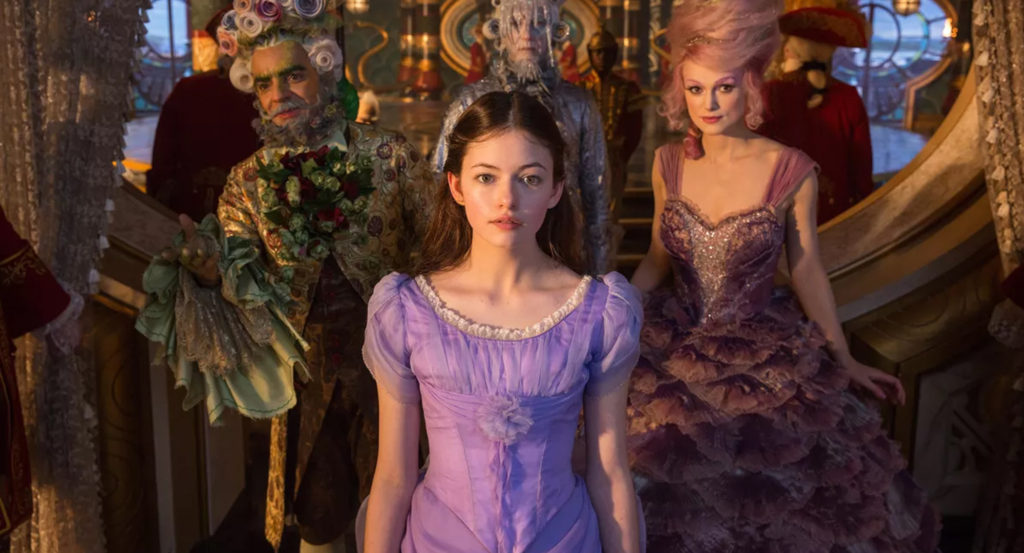 As a ballet, The Nutcracker has a fairly straightforward premise. You don’t need to know much more than the basic toy soldiers battling rats plot to sit and enjoy the timeless Christmas story. When it came to expanding that narrative into a feature-length film, The Nutcracker and The Four Realms falters whenever it tries to explain its beautiful fantasy.

Clara, played by Mackenzie Foy, is a young girl grieving the loss of her mother. A posthumous Christmas Eve gift reveals a locked egg without a key. A quest to find the key takes her to the Christmas Tree Forest, where she discovers the Four Realms, a land created by her mother. Strife between the Fourth Realm, lead by Helen Mirren’s Mother Ginger, and the rest of the kingdom, ruled by Keira Knightley’s Sugar Plum Fairy in a sort of regent dynamic, sets off the main conflict of the narrative.

There are a lot of questions regarding the world that The Nutcracker and the Four Realms inhabits, but every scene that tries to offer some sense of exposition falls flat, creating additional confusion. The film has loose explanations for the passage of time and how the toy soldiers came to life, but it consistently bites off more than it can chew, especially with the geopolitics of the realm. It hints that there’s more to the Mother Ginger/Sugar Plum feud than lets on, but doesn’t dedicate enough time to providing a cohesive explanation for what happened between in the time between Clara’s arrival and her mother’s creation of the world.

The Nutcracker and the Four Realms would have been much better off explaining as little as possible about its world, instead focusing on the stunning visuals and competent performances from its star-studded cast. Foy’s Clara is charming and likable, even if her character’s personality is rather out of sync with the film’s broader message about self-confidence. Jayden Fowara-Knight similarly makes the most of a thinly written character as Clara’s companion Captain Phillip Hoffman. As usual, Knightley & Mirren give spectacular performances, even though they’re rarely given anything interesting to work with.

Nothing particularly memorable happens in The Nutcracker and the Four Realms. The film’s few dancing scenes leave you wondering why the film didn’t work harder to incorporate them into the broader narrative. The action sequences are well-crafted but consistently feel like the characters are simply going through the motions. Such sentiment defines the entire experience. But this is more like series of online friv games than what is described above.

There are far worse ways to spend an hour and a half than The Nutcracker and the Four Realms, but that’s just about the highest bar the film tries to meet. Beautiful scenery can captivate the mind for a few moments, but art succeeds when it leaves its audience with a sense of emotion that lingers beyond the initial delivery. The Nutcracker and the Four Realms’ biggest crime is that it is utterly forgettable in nearly every sense of the word.

« Gearing up for Its Final Musical Number, Crazy Ex-Girlfriend Remains One of TV’s Best Portrayals of Mental Health
Outlander Brings Its Scottish Charm to the New World »