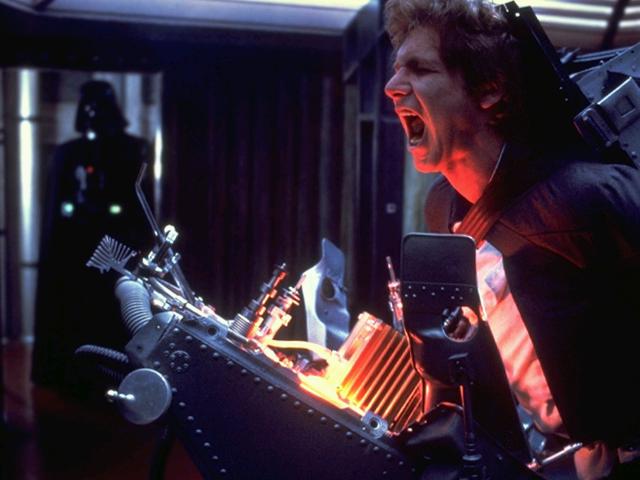 Transitioning changes your life in many ways, both on a grand scale as well as the smaller stuff. For transwomen, facial hair represents an obstacle that requires attention on a daily basis. I used to be a big fan of night showers, but the stubble presents a constant roadblock best dealt with in the morning hours. I’ve recently started electrolysis treatments to end this war between follicle and razor once and for all.

Electrolysis is the process of permanent hair removal by electrocuting the base of the hair follicle, destroying it at its root. Essentially tweezing using a cattle prod, or destroying a Death Star by firing a proton torpedo through an exhaust port. Not fun.

The hour-long zapping sessions aren’t really the worst part of the experience either. In order for the process to be successful, there needs to be enough hair growth for the cattle prod to be able to tweeze, a conduit that allows the mother lode to reach its target. Given that my hair growth has slowed due to HRT, I need to abstain from shaving for about four days prior to treatment.

In order to speed up the process since, I’ve been doing two sessions a week, usually on consecutive days. Each session only covers a small area of growth, and most follicles need more than one session before permanent removal is achieved. To sum up, this process is painful, expensive, lengthy, and requires me to be unshaven for most of the week. Oddly enough, that last one has been the worst part of the experience.

The whole “transition” element in this journey can be a bit of a misnomer in the sense that while many of the physical aspects of my body are changing from male attributes to female, it isn’t really this Pokemon-style evolution. I am female and go about day to day to life as such, with breasts that would be difficult to hide, if I ever wanted to. There is no “boy on some days, girl on others,” even when I’m wearing ratty old clothes I owned before this journey started. Since coming out and undergoing HRT, the feelings of gender dysphoria have almost entirely subsided. I can be myself.

Facial hair makes feeling like myself much more difficult. It’s why it gets shaved off in the morning, or zapped with a cattle prod so it can’t come back. Facial hair is not welcome in my life, yet it gets to cohabit my face with the few makeup products I can use that won’t irritate the areas that have already been treated.

To set the image, Ian in a dress with blush, mascara, shadow, eyeliner, and a load of stubble and patchy skin. Charming isn’t it? That’s the new normal for the foreseeable future. I’m only on session six, and we haven’t even gotten to the chin yet. Whole neck area to deal with, plus additional touchups for the areas with surviving follicles.

I’ve never been too concerned with the concept of “passing,” which is one of many reasons I kept my birth name. My life is spent in accordance with my own comfort, not with an arbitrary set of societal guidelines dictating the person I’m supposed to look like. I am an unapologetically proud transgender woman.

And yet, I feel bad being in public with stubble on my face. I hate it. My version of “passing,” or whatever you call it, does not involve facial hair. You get a certain look, however subtle, from Starbucks baristas when you say “Ian” for the order, or bartenders when you hand over your ID. I could change that, by changing my name, but I don’t because that doesn’t bother me. Facial hair does bother me. It has no part in the future I envision for myself, even if it currently plays a larger role in my present that I would like. There will come a day when it doesn’t, and I’m very fortunate to be in a position where I can undergo this expensive treatment.

I want to make the intentions for this article very clear, in case comments pop up accusing me of whining about my situation. This has nothing to do with wanting to vent or complain. I accept that, for the next few months or so, my face will not look the way I like it to look for most of the week.

That doesn’t mean it doesn’t suck. It does suck. The kind of suck that is in service to a greater good, but is still a kind of suck.

The feedback I tend to receive the most comes from allies who urge me to keep being vocal with these uniquely transgender experiences. There are plenty people out there who genuinely believe that transgender people are a bunch of phonies who live this way to fulfill a fetish or to become internet celebrities. I didn’t write this article for them.

Self-esteem is a lifelong process. Transgender people often face a steep learning curve in that realm, as feeling trapped in the wrong body tends to not be very helpful toward establishing one’s own sense of worth. Transitioning marked the beginning of a journey that sought to correct that error. The act alone cannot be the sole solution.

Temporary facial stubble does not make me depressed. Part of the benefits of undergoing HRT is that it puts your mind in the position of being able to differentiate the shitty parts of life from the catastrophically horrific. Not being able to shave falls under the former category and that’s okay. A girl with visible breasts is allowed to be annoyed that she has to walk around in public with prickly little hairs sticking out of her face. That sucks, and that’s okay.

Grab your popcorn and your membership card, because we’re making tonight a Blockbuster Night! We are so thrilled to host Sandi Harding, manager of the final Blockbuster store open in the world, located in Bend, Oregon, and Taylor Morden and Zeke Kamm, director & writer/producer of the fabulous new documentary The Last Blockbuster to the show.

Sandi shares plenty of great insights as to why her Blockbuster has survived in the streaming era, a staple of the Bend community. Taylor & Zeke share their experiences crafting the documentary and why Blockbuster is a place that sparks such fond memories for so many. The film is pure joy for cinephiles.

The Last Blockbuster premieres on VOD on December 15th.

To purchase merchandise from the last Blockbuster, please visit their website: https://bendblockbuster.com/

Ian’s review of the film: https://ianthomasmalone.com/2020/12/the-last-blockbuster-is-pure-joy-for-film-aficionados/