In Defense of No Man’s Sky 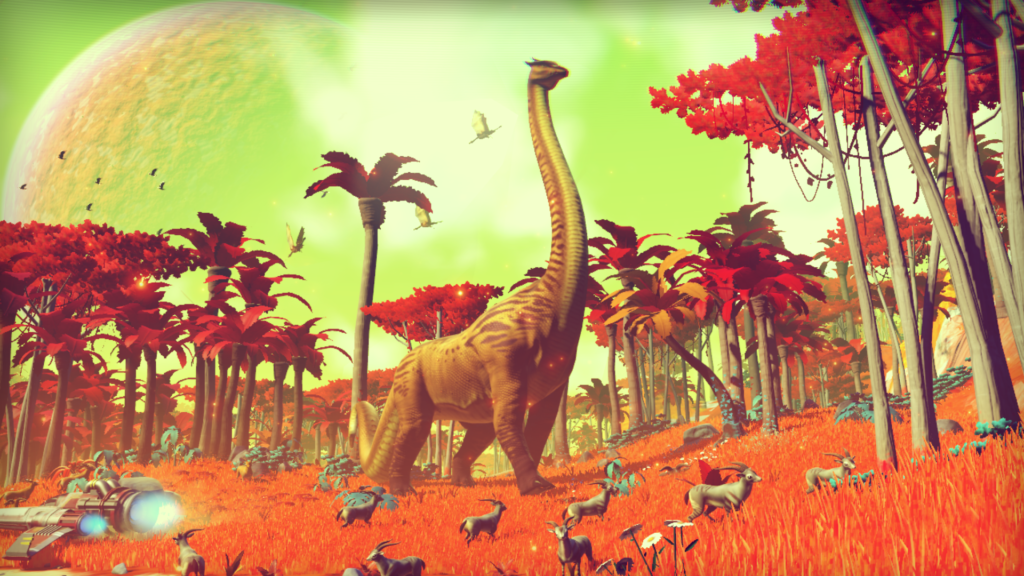 As someone who grew up in the era where blowing into your cartridge was the only way to improve video game functionality, the idea that No Man’s Sky could receive such a massive structural overhaul months after its release day is still fairly remarkable. I did a live video defending the game back in August that quickly became the most watched on my page with 18,000 thousand views. There’s no denying the game is polarizing, rightfully so for many reasons. The problem is, many of the knocks against the game have never really been fair.

The two chief complaints I’ve heard since the games release tend to be concerned with its marketing and price point. No Man’s Sky promised big things in its trailer and failed to deliver vividly unique locations filled with interactive critters of all sizes. The game shattered sales expectations both in the U.S. and abroad, explaining the massive outrage that still manages to trend on social media months later.

One question that’s always stuck with me throughout this process is an age old quandary. How much of the blame belongs with the consumer?

No Man’s Sky may have skyrocketed in sales before taking a catastrophic nosedive, but the same can’t be said of the reviews. Those were always bad. Before falling off the grid, Sean Murray even hinted that the game might not be for everyone. The marketing may have been misleading, but this is hardly a groundbreaking revelation. The role of marketing isn’t to provide an objective opinion on a product, but rather to get you to buy it.

The other big issue focused on the game’s sixty-dollar price point. This is also a valid complaint, to a certain extant. It’s also one that’s easily explainable through a basic understanding of society’s relationship with entertainment.

It also isn’t fair to No Man’s Sky. Hello Games charged what they could get for it. A thirty-dollar price point would have alleviated some of the outrage (though there’s still the misleading trailer), but who’s responsibility is it to make that call? There isn’t a litmus test for what qualifies to be labeled full price. As we saw with the subsequent price drop, the idea that No Man’s Sky was in fact overpriced isn’t really contested.

Anyone who truly cared about that would have waited for the reviews, which never masked the game’s imperfections. The disappointment over No Man’s Sky was unavoidable. Choosing to wait to make a decision until all the facts were on the table wasn’t. Waiting a single day after the game’s release would have told you everything you needed to know.

No Man’s Sky is a deeply flawed game, but I never felt ripped off. I’ve played it for hours, mining crap and collecting Atlas Stones without really caring what the end goal is. As someone who doesn’t have a ton of time to really get invested in Fallout 4 or Skyrim (as majestic as they are), there’s something comforting about No Man’s Sky’s simplicity.

That reasoning isn’t going to fly for everyone, especially those who wanted another Skyrim or Fallout. Therein lies the age old debate of taking in something for what it is as opposed to what you want it to be. I don’t begrudge anyone who hates No Man’s Sky. It could have been better and it should have been better.

But we can’t pretend like there’s some concrete hours to dollars ratio for video games. The phrase “you get what you pay for” rings true here, but there’s also the idea that you have the ability to research that which you choose to pay for. I can’t help but feel like many of the people who hate No Man’s Sky are angry because they didn’t do that.

« Why Does Gilmore Girls Have a Monopoly on WB Nostalgia?
Rogue One Sets A Strong Template for Standalone Star Wars Films »