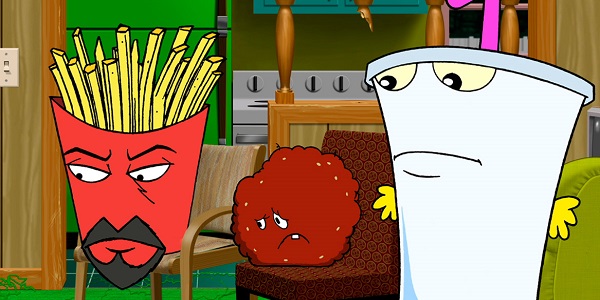 I shouldn’t say ending. It’s being cancelled, which is baffling. It even feels weird to type that blasphemy.

Maybe it’s because it’s the last Adult Swim original to call it day, with a run that was longer than the other three combined (Sealab 2021, The Brak Show, and Harvey Birdman: Attorney at Law). ATHF is practically synonymous with the network itself, which ushered in a new era of animated excellence and for better or for worse, gave us more Family Guy (and Futurama, though that was mostly a good thing).

It could be because popular, long running animated comedies don’t really end. The Simpsons, Family Guy, and South Park are older and still going strong in certain ways. The ones that did end, King of the Hill and Futurama, were cancelled. While it would be silly to suggest that ATHF ever reached the worldwide popularity of the first three mentioned, it is the flagship program of its own network, which certainly should mean that cancellation shouldn’t be an issue.

Its fifth and final title, Aqua Teen Hunger Force Forever might seem ironic since it’s the last one, but it is rather appropriate. With co-creator Dave Willis remaining at Adult Swim, it seems plausible that the show could, and probably will, resurface at a later date, considering Adult Swim’s antics (Perfect Hair Forever anyone?) and the current trend in TV to bring old stuff back, which I doubt is going away anytime soon.

Patti Smith has recorded a somber elegy for ATHF. I’m not sure what else should be said since I refuse to believe this is actually the end. Call it denial, but it’s more than that.

We know at some point in time, Master Shake, Frylock, Meatwad, and Carl will show up. Whether it’s another season, movie, or an April Fool’s Day gag, we haven’t seen the last of anyone’s favorite cartoon “detectives.” I’m not even fully convinced we won’t see them next year with another season.

I could point out that TV hasn’t always been kind to the surreal and the unconventional. Shows that dare to be different often get cancelled, though normally not after fifteen years. That’s what I can’t seem to wrap my head around.

ATHF has never been an easy one to assess from a critical standpoint, making it hard to say whether or not it’s gone downhill in recent years. Adult Swim President Mike Lazzo said he was ready to move on. Was that for good reason?

I’m going to go ahead and say no. Recent years have probably had more hit or miss episodes and the same is true for nearly every long running series. Aqua TV Show Show’s ninth episode “Piranha Germs” remains one of my favorite of the whole series. With humor like that and a will to continue, I think it’s safe to say ATHF had plenty left in the tank.

So it ends. For now, or maybe not. Perhaps I’m wrong and we’ll never see those guys again. I hope not.

I’ll end this “eulogy” with this, Aqua Teen Hunger Force is one of the greatest animated comedies of all time. I suppose some will disagree and I hope Master Shake throws those people on the ground before going back to his reclining chair. Why didn’t he have a bedroom?